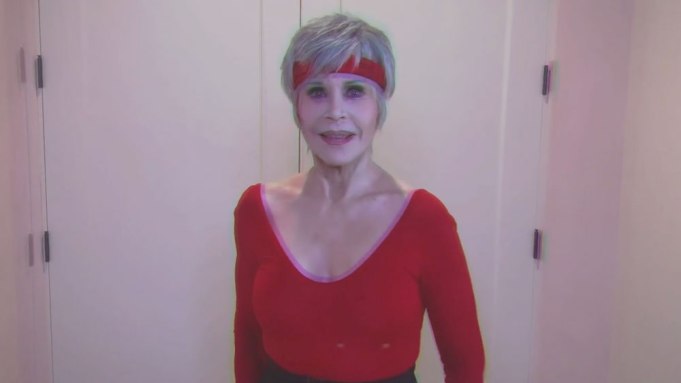 Thirty-eight years after Jane Fonda released her first workout video in 1982, the acting and exercise icon has slipped back into her leotard and headband to get out the vote.

Fonda has teamed up with Register2Vote to lead Exercise That Vote, a celeb-filled video promoting voter registration and voting on Nov. 3.

Perry, who recently gave birth to her and Bloom’s first child together, is seen breast pumping while telling viewers, “Get pumped to vote.”

Earlier this year, Fonda focused her political activism on climate change. She teamed up with Greenpeace and other environmental activist a year ago for Friday Drill Friday, a weekly series of protests in Washington, D.C. to shine a spotlight on the climate crisis. She was arrested during one of the protests on her 82nd birthday. In her book “What Can I Do?,” released last month, she writes about her work as a climate change activists.

In April, Fonda joined TikTok with a video showing her doing leg lifts while inviting her followers to join the first virtual Fire Drill Friday.