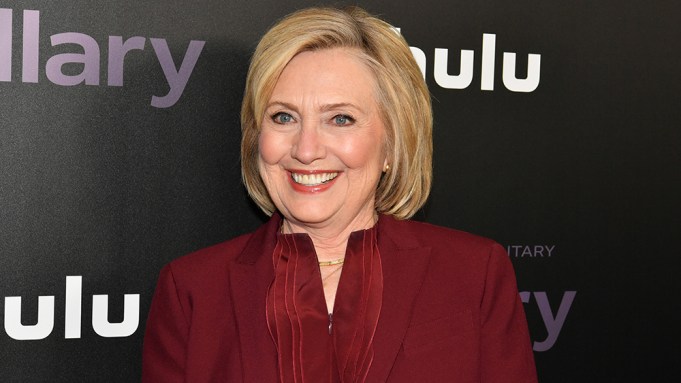 Hillary Clinton has yet to formally endorse a presidential nominee, but the political trailblazer offered some advice to the Democratic candidate tasked with taking on Donald Trump.

“My hope — and certainly my advice — is that the Democratic Party unite behind whoever the nominee is,” Clinton told Variety Wednesday night. “The most important thing for our country, not just for the Democrats — all Americans — is to defeat Donald Trump. That’s what I’m going to be working toward.”

Clinton was joined by director Nanette Burstein at the Director’s Guild Theater in New York for the premiere of “Hillary,” a four-part “Hulu” documentary that provides an unflinching and in-depth portrait of the former first lady, secretary of state and 2016 presidential nominee. The candid look at her life and career comes nearly four years after Clinton, the first female to be nominated for president by a major political party, lost to Trump. But “Hillary” spans beyond just the last presidential race, also shedding light on how she and her husband, Bill Clinton, worked through the Monica Lewinsky scandal and impeachment trial, as well as her time at Yale Law School and the women’s rights movement.

“I thought it was the right time because I’m not running for anything,” Clinton said. “I was given the chance to work with a director who I really thought would understand the complexity of my life and the lives of women over the past 50 or 60 years and our politics. I’m really glad I participated. I never could have predicted that it would be such a really intense but gratifying experience.”

Clinton, who gave Burstein unprecedented access to footage from her campaign, sat down for 35 hours of additional interviews for “Hillary.” Bill Clinton, Chelsea Clinton, Barack Obama and other figures who have followed her career also lent their voice to the docu-series.

“I learned there is a very real and human and complicated person behind the media figure, the figure we admire, we vilify,” Burstein said. “She’s a very complicated human who has had enormous challenges in her life. I hope people get a sense of who the real person is.”

As Clinton made her way down the red carpet posing for pictures and stopping for interviews, she greeted guests and reporters with Center for Disease Control-approved elbow bumps. She’s currently set to speak at South by Southwest, the annual film festival in Austin, Texas, later in March. Though multiple companies including Twitter, Facebook, Apple and Netflix have pulled out of the conference amid coronavirus concerns, Clinton said “at this moment, I’m still planning on going.”

Clinton praised the high voter turnout on Super Tuesday, which took place the day before her premiere in Manhattan. She commended Joe Biden’s surge in polls, but attests she’s not contemplating joining the ticket as his running mate, should the former veep secure the Democratic nomination.

“Oh I’m not even thinking about that,” Clinton said. “I was very pleased that we had a huge turnout, people are really focused on beating Trump, and that’s what they should be focused on.”

Though she came close, Clinton wasn’t able to crack the glass ceiling that would have made her the first female president of the United States. Still, she’s holding out to see a woman in the White House in her lifetime.

“I came close, I won the popular vote and was very honored to be the Democratic nominee,” Clinton said. “But I really want to see a woman president.”