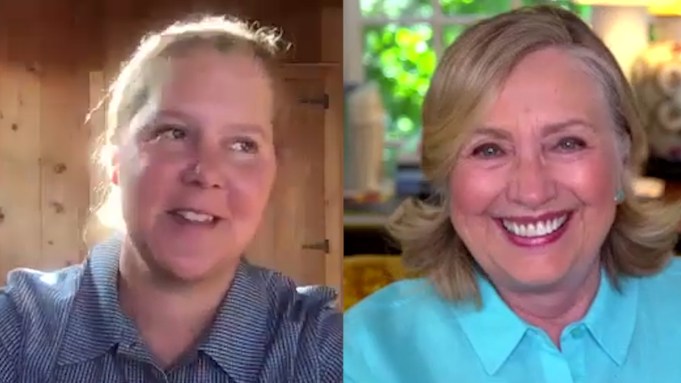 Amy Schumer had a message for Hillary Clinton.

On the day after the 2016 election, the “Trainwreck” actor and comedian took to her Instagram account to express her rage at the millions of Americans who had supported Donald Trump. “People who voted for him, you are weak. You’re not just misinformed, you didn’t attempt information,” Schumer wrote online. “Well, you’ve gotten what you asked for. And now you can watch the sky open up, literally.”

“Wow, who said that?” Clinton asked, when presented with the quote.

For nearly an hour, Schumer and Clinton spoke over Zoom during a conversation for Variety’s Virtual TV Festival, which streamed on Variety.com this week. What brought them together was a common experience: Both Clinton and Schumer are the subjects of recent documentaries about their careers and lives as trailblazing feminists.

In “Hillary,” now playing on Hulu, director Nanette Burstein mines 1,700 hours of unseen footage from the 2016 campaign and more than 35 hours of new interviews with Clinton to explore the politician and the person behind the pantsuit.

And in “Expecting Amy,” coming to HBO Max on Joy 9, director Alexander Hammer chronicles Schumer’s life on the road as a comedian who is navigating her first pregnancy

The former Secretary of State and First Lady spoke from her home in Chappaqua, N.Y., while Schumer was isolating with her family on Martha’s Vineyard. There were moments of levity in the interview as Schumer asked Clinton if she was a good sleeper. “I’ve always been a really good sleeper,” Clinton said.

In her spare time, Clinton said she was catching up on the TV series “The Marvelous Mrs. Maisel.” “I love all the 1950s and ’40s looks, and the clothes,” Clinton said. “Do you relate to her character at all, and the stand-up?”

“I like to think that I’m funnier than her,” Schumer said about the title character played by Rachel Brosnahan.

But beyond these lighter moments, Clinton’s conversation with Schumer was rooted in the current reality — of ongoing racism in the United States and the sexism that led to Trump’s surprise victory.

“It was such an emotional gut punch,” Clinton said of how she felt when she learned of the results of the election. “I didn’t think I was going to lose. But I felt a sense of real responsibility, like how did this happen? Of course, I was really worried about Trump. But he’s been worse than I even feared he would be, and as I tried to warn people he would be.”

Clinton also spoke about the health, civil rights and economic crises associated with Trump’s presidency. “We’re seeing that play out dramatically right now between COVID, and the economy, and the terrible decisions he made around peaceful protestors, and trying to send in the military — and so much that is contrary to the Constitution, to our fundamental values to humanity,” Clinton said. “So, I have carried with me this real sense of deep responsibility that, ‘Oh, my gosh, I just can’t bear the fact this man became president.’ For whatever combination of reasons, and there were a lot of reasons, I win a popular vote and lose the electoral college by literally a handful.”

Clinton vowed that she was determined to help Joe Biden defeat Trump in the upcoming November election. “I’m spending most of my time trying to do everything I can to retire him, and to send him back to the golf course full-time,” Clinton said.

She continued: “This protest that is going on” — in response to George Floyd’s death at the hands of Minneapolis police officers — “it really is a kind of moment of moral reckoning,” Clinton said, noting that people could no longer ignore images of police brutality shot on iPhones. “They can’t turn away from that eight-minute-and-46-second video. They can’t turn away from the look on that policeman’s face where he just literally shifted his body and put his hand in [his] pocket and put greater pressure on Mr. Floyd’s neck. Because they can’t look away, they have to come to grips with what has gone on.”

Clinton told Schumer she believed that there have been changes in the dialogue about racism that exists in the United States. “Black Lives Matter was considered a kind of radical statement a few years ago,” Clinton said. “I remember I was criticized, I was attacked online, for using it. And I get it, and now we’re at a different point because people’s awareness, consciousness and actual events that they now see on their phones has changed the debate.”

Schumer said that in the few times she’s spent with Clinton, she’s been shocked by the way that people have treated her.

“One time I got to sit next to you at your birthday, and one time we were at this awards show,” Schumer said. “It was before you had announced your run, but everybody kind of thought you were probably going to run. The host of this show came out, and it was this guy, and he did a whole thing where he was singing to you, and trying to seduce you, and he sat on your lap. And I’m like, ‘This is so inappropriate. This is probably the next president of our country.’”

Clinton told Schumer that, throughout her campaign, she’d saw that voters would respond to her differently based on their own biases about women.

“I really did feel that I was this walking Rorschach test,” Clinton said. “That people would project onto me all kinds of feelings and experiences in their own lives. Obviously, it was most apparent around my decision to stay in my marriage, which was a very painful, personal challenge. We talked, obviously, quite a bit about [that] in the documentary, and it was not easy. I felt like I was making, at the end of the day, the right decision for me, my family. And therefore, I was very much at peace with that.”

Schumer said that for as long as she could remember, she’d always looked up to Clinton as a role model. “When I was a little girl,” Schumer said, “if somebody told me I was going to someday Zoom with Hillary, I don’t know what that would’ve meant, but I would’ve known it was special.”