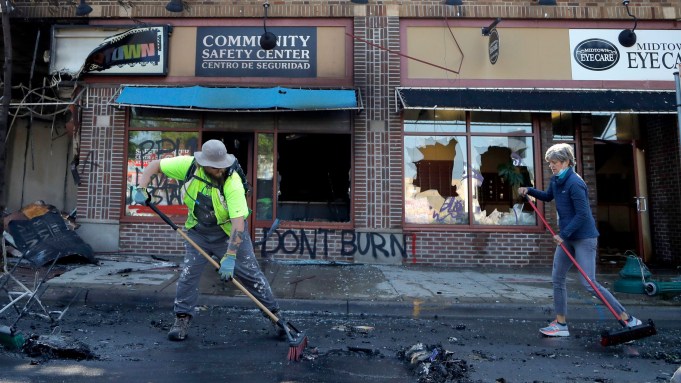 New York City is extending its curfew after protests over police brutality that began peacefully on Monday were marred by widespread looting and vandalism as the night wore on.

Mayor Bill de Blasio said that the restrictions will begin at 8 p.m. on Tuesday. It will lift the next morning at 5 a.m. Previously, the city imposed a curfew between 11 p.m. and 5 a.m. The new curfew will continue to be enforced for the remainder of the week.

The killing of George Floyd, an unarmed black man, by Minneapolis police officers on May 25 has roused protests and demonstrations across the country, inspiring people to take to the streets in major cities such as Los Angeles, Philadelphia, and Atlanta. Demonstrators are upset about systemic racism and a criminal justice system they argue endangers, ignores, and unfairly targets black people.

Derek Chauvin, the police officer who knelt on on Floyd’s neck for more than eight minutes, has been charged with third-degree murder and manslaughter. Video of Floyd’s death has been widely shared on social media.

During a press conference on Tuesday, de Blasio said he sympathized with the protestors, but decried the destruction of property and the clashes between some people and the police.

Monday’s curfew in New York City proved to be ineffective at preventing people from robbing businesses and destroying. There were reports of fires and looting in the Bronx and Manhattan, and retailers such as Macy’s in Herald Square and Chanel were targeted by robbers.

“These protests have power and meaning,” de Blasio tweeted. “But as the night wears on we are seeing groups use them to incite violence and destroy property.”

“When outside armed forces go into communities no good comes out of it,” said de Blasio.

De Blasio said that many protestors rejected people in the protest who were destroying property or attacking law enforcement officers.

“There were peaceful protestors who rejected the violent elements and forced them out of protests,” said de Blasio.

He added that he was worried that the demonstrations, which have attracted thousands of people, would contribute to the spread of coronavirus. The city has been the epicenter of the pandemic in the U.S. with 208,550 cases of coronavirus and at least 21,090 deaths.

“The danger [of spreading the disease] is increasing,” said de Blasio.

The mayor said he hoped that the images of looting and violent confrontations would not blot out the grievances of the protestors. He cited images of police officers taking a knee out of respect for demonstrators as a powerful sign of a collective desire to change. However, he also urged protestors to honor the curfew.

“If you choose to protest today, do it in the daytime hours and then please go home,” said de Blasio.