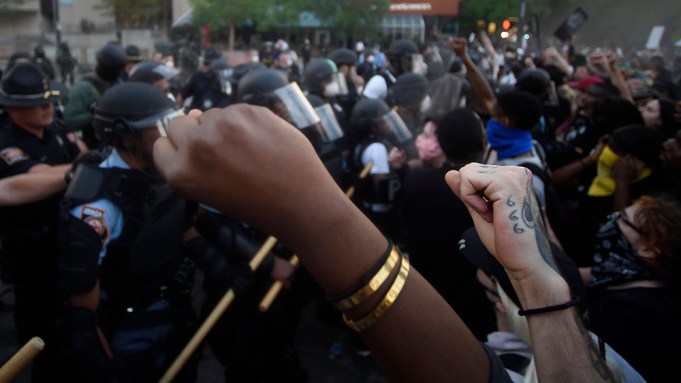 Protesters took to the streets Friday in Los Angeles, New York City, San Jose, Atlanta, D.C. and other major hubs across the country following the death of George Floyd at the hands of law enforcement officers in Minneapolis.

In Atlanta, the protest began peacefully but took a destructive turn, as demonstrators smashed the doors of CNN headquarters, sprayed graffiti on the television news building and set a police cruiser on fire, according to WSB-TV 2 Atlanta. The news outlet’s live feed also shows protesters picking up a barricade in what appeared to be an attempt to hit a police car.

Earlier Friday, CNN correspondent Omar Jimenez and a CNN camera crew was arrested live on air as they were covering the unrest in Minneapolis, where protests have continued for four days.

The demonstrations mark the fourth night of protests. Unrest across the nation has swelled after video surfaced of Minneapolis police officer Derek Chauvin using his knee to pin down Floyd, a black man, on his neck. Floyd later died. Chauvin was on Friday arrested and charged with third-degree murder and manslaughter.

In New York, protesters have gathered in lower Manhattan and outside of the Barclays Center in Brooklyn, according to local news reports and footage on social media.

A lot just popped off at the protest for George Floyd at the Barclays Center in Brooklyn. Pepper spray, batons, and several arrests. pic.twitter.com/ZuciQA82fe

Mayor Bill de Blasio tweeted that NYPD have been “given a very clear instruction” to “respect peaceful protest,” and reminded protesters of the importance of peaceful demonstration.

Our police officers have been given a very clear instruction: as always, respect peaceful protest. We in this city have a long history of respecting every kind of viewpoint, that is the essence of New York City.

The White House briefly went into lockdown amid protests in D.C. NBC News reporter Peter Alexander noted on Twitter around 5:30 p.m. PT that the lockdown had been lifted, and posted video of police in riot gear on the grounds of the White House.