Beverly Hills is bracing itself for the upcoming presidential election by boarding up store windows and covering community art pieces.

Several art pieces in Beverly Gardens Park, as well as the iconic Beverly Hills sign, have been covered with tarp in preparation for Election Day unrest. The famed Rodeo Drive is especially on high alert, as it was revealed on Thursday that the street will be closed off to both vehicle and pedestrian traffic for 48 hours, beginning Nov. 2 and extending through Nov. 4. 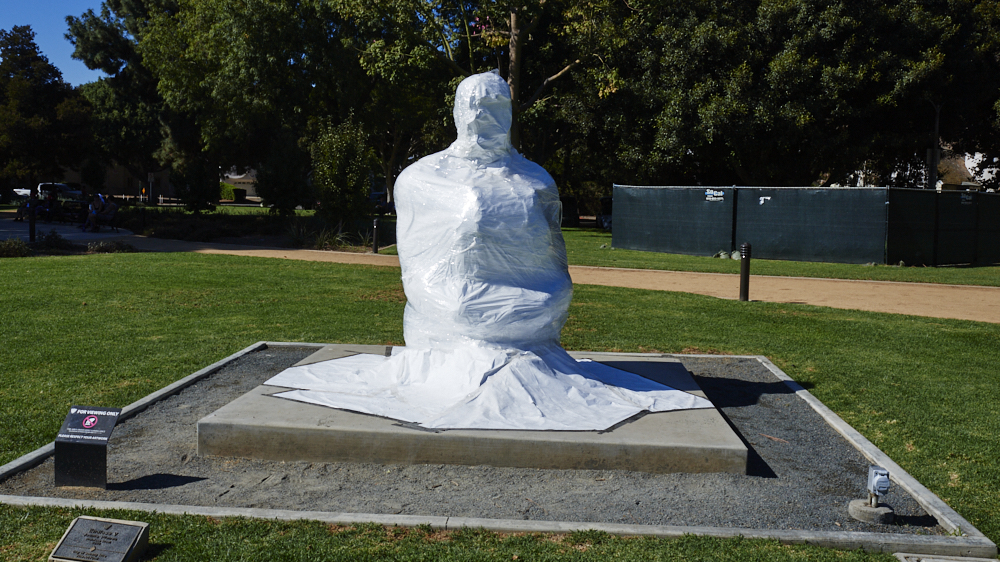 Beverly Hills prepares for unrest after the upcoming election by covering up windows and art installations on October 31, 2020.

On Saturday, Beverly Hills police officers began working 12-hour shifts with no days off, a mandate that will continue throughout the week of the election, according to KABC. The department is also hiring 80 armed security guards and working with the Santa Paula Police Department’s SWAT team to prepare for possible unrest.

Trump supporters gathered on Saturday for a rally, which BHPD eventually declared an unlawful assembly. There was another demonstration nearby, and it was reported that a fight broke out between a participant of that rally and a pro-Trump protester. According to the Los Angeles Times, police in riot gear were standing nearby to guard storefronts along Rodeo Drive. No arrests were made.

L.A. Mayor Eric Garcetti has maintained that although the city is preparing for unrest following the election, that doesn’t mean that there will be.

“We are very prepared for the election, but at the same time I don’t want to buy into a narrative that there’s going to be chaos during our election,” Garcetti said during a press conference on Oct. 28. “We prepare for the worst, but we are hoping and expect generally the best.”

Since June, Beverly Hills has prohibited protests in residential areas after 9 p.m. They have arrested 25 protesters for violating the curfew, and are moving forward with prosecution.