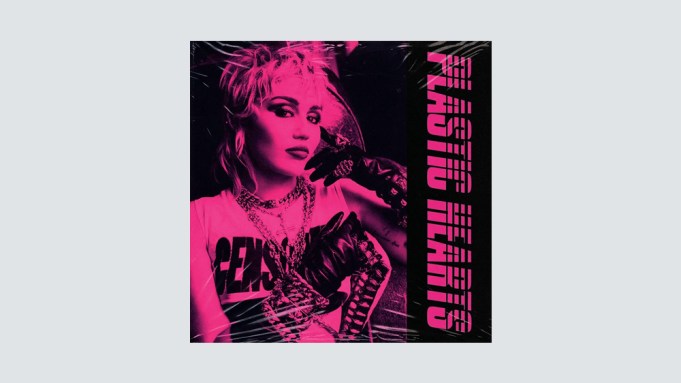 The great, late drag queen Mertzy Jones had an expression: “Miss Too-Many Things is a mess in a dress.” For better and worse, that describes Miley Cyrus, an artist whose restless, genre-jumping eclecticism often sounds more like a kiddish cluttered mind with a dabbler’s sensibilities, rather than an ambitious experimental aesthetic.

Luckily, that’s not such a bad thing when it comes to the world of social-mediated pop that she’s lived in since she was the Disney child-star character Hannah Montana’. Cyrus never self-described or -prescribed herself as a Bowiesque artiste, musically or culturally, but rather an arriviste free to pop in on slick hip-hop (“Bangerz”), avant-psychedelia (“Miley Cyrus & Her Dead Petz” with Flaming Lips, playing a femme version of Wayne Coyne) and good-time pop touched by melancholic Californian country (“Younger Now”).

A thick-voiced mezzo-soprano possessed of power, sass and a husky twang to go with her tang, Cyrus too often has had nowhere to roam with her vocal skills, leaving so much of her studio product of the past to sound cramped and vapid. Miley has been like a louder Stevie Nicks stuck in a corset, too-tight and restricted by her producers’ ideas of who she could be at the height of her power.

With her full-length albums spotty at best, Cyrus’ finest moments have come through live YouTube clips, be it covering her godmother Dolly Parton’s “Jolene,” Pink Floyd’s “Comfortably Numb” and Blondie’s “Heart of Glass,” or during her time on Netflix’s “Black Mirror” where she played the weirdly autobiographical Ashley O, a teeny-bop star only truly fulfilled as a radical, punk-rocking replicant-like version of the real thing.

Those last elements — the glossily new wave-ish, the downright spunky – is where Cyrus is nestled on “Plastic Hearts.” With her melange of Dr. Frankensteinian collaborators (likeco-songwriter and duet partner Dua Lipa, long time co-producer Mark Ronson and mixologist Louis Bell of Bieber/Camila Cabello fame) making it appear as if she’s still caught in a dabbler’s web, Cyrus this time at least sounds as if she’s having fun acting out the role of the monster (as opposed to “Bangerz,” where she sounded like a lab rat). Listen to “WTF Do I Know,” and its grungy, palpating rhythm guitar intro and Cyrus’ own opening line — “I’m not trying to have another conversation / Probably not gonna wanna play me on your station / Pouring out a bottle full of my frustration” — and tell me she’s not having a laugh at her expense.

Complete with a Mick Rock-posed, high cheek-boned cover snap (he being the photographer who essayed Bowie and Debbie Harry early on) bathed in hot pink, a coterie of cleanly-crunching guitars and sleek ’80s synths and sneering guests such as Joan Jett and Billy Idol, “Plastic Hearts” comes across like Cyrus’ take on “Parallel Lines.” While all of Blondie’s processed power-pop flash and panache remain intact within the walls of “Plastic Hearts,” its subtle, deadpan danger is replaced by a willingness to please, and to tease out Cyrus’ snarling twang and countrified roots. This is no more her punk-rock record than “Folklore” is Taylor Swift’s version of Joni Mitchell’s “Blue.” “Plastic Hearts” just makes sense of the hard and the soft, the pop and the country, the gruff and the sweet in a way that no other Cyrus album has before in its entirety.

For example, the electro-spare, tribal beating “Bad Karma,” on paper, sounds as if it’s going to “creep in the night,” in accordance with its lyrics, and stay on the glossy punk side of the ledger with duet partner Joan Jett providing her own low angry purr to the proceedings, But an insistent series of oversexed moans and groans becomes an FX-processed percussive tic, and together, the vocalists ride out an irresistibly contagious pop-country chorus that’s equal parts Shania Twain and Peaches. Kudos to Ronson and Jett’s longtime producer Kenny Laguna for playing up both singer’s strengths, and for turning Joan into a perturbed country kitten.

Sadly, the throbbing, clubby “Night Crawling,” with Billy Idol, and its slower, prettier cousin “Prisoner,” featuring Dua Lipa, don’t hold the same originality or catchiness within their grasp. While the former is a lame Ryan Tedder attempt at re-penning “White Wedding” for TikTok-ers, the latter is a surprise, spun-synth-sugar mess, with Cyrus’ voice neutered by AutoTune and  Lipa’s listless vocal lines blurred in its mix. If you’re going to give Cyrus sweets, make it dark, booze-filled chocolate and not fluffy cotton candy.

Think the Beatles-ish “Hate Me,” instead. If you’re going to remove the gutsiness from Cyrus’s vocal, make the melody as sweet, bright and airy as her voice, and the blame for busted romance all hers. “Go ahead, you can say it’s my fault, if it still hurts at all,” Miley sings sadly through a symphony of ringing guitars. Another slower track, the smoked hammy “Golden G-String,” maintains a gentle somnolence, albeit one with a rougher edge. “The old boys hold all the cards and they ain’t playing gin,” Cyrus sings through the teary ballad with more disgust than desire on her mind.

Luckily, only a few songs on “Plastic Hearts” dare to remove all of the grit and gristle from Cyrus’ emotive vocals, while boldly bathing her in a sympathetic wash of electronic floss, tech-heavy production and tenderly knotty tunes. Hearing the Nicks-ish synth-rock syncopation of “Midnight Sky,” and Cyrus’ rough croon nestled against the yawning steel guitars and acoustic guitar-strewn C&W of “High” and the lava lamp folksy soul of “Never Be Me” is finally a seamless exercise for the singer — one that doesn’t make Miley sound as if she’s mired in pastiche or stuck between soundtracks to her life.