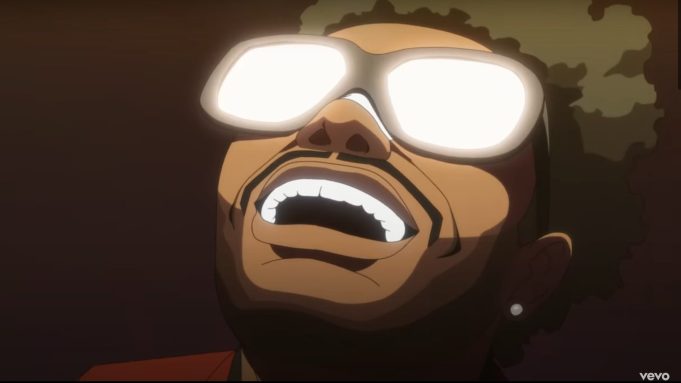 The clip — which is loaded with easter eggs for fans — begins with his busted-nose “After Hours” character in the desert, then quickly segues to The Weeknd’s hometown of Toronto and follows the song’s lyrics through hustling in the “dead streets” with his friends and into a house filled with balloons (get it?). Things then get a bit more impressionist and reminiscent of the initial storyline of the first few “After Hours” videos — there’s a light-sabre battle, cougars (literal cougars) and sexy female characters who apparently turn evil — before he’s alone in the desert walking toward Las Vegas, where he encounters himself — dressed as the busted-nose character.

The Weeknd has been on an animation kick in recent months, as he’ll appear in the season 10 finale of “Robot Chicken” on Sunday (July 26) — his second appearance as a voice actor this year, following his starring role in an “American Dad!” episode earlier this year, which he also co-wrote. He spoke with Variety about both appearances during the spring, and spoke at length with us about “After Hours,” his life and his career in our April cover story.

The Weeknd has also made major donations to charities this year, including $1 million for coronavirus relief (giving $500,000 each to MusiCares and to the front-line hospital workers of Scarborough Health Network, the hospital network in the Ontario city where he was raised) and $500,000 to Black-empowerment organizations (with donations of $200,000 each to Black Lives Matter Global Network and the Colin Kaepernick Know Your Rights Camp Legal Defense Initiative, and $100,000 to National Bail Out).