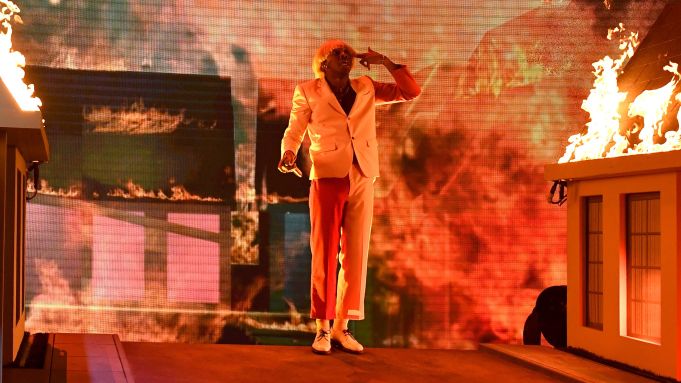 Tyler, the Creator set the Grammys ablaze on Sunday night (literally), while also making it shake in one of the night’s more explosive performances.

Accompanied by Boyz II Men and the artist affectionately called “Uncle Charlie” Wilson, Tyler performed “Earfquake” before breaking into “New Magic Wand.” Both songs are featured on his latest album “Igor” which is nominated for Best Rap Album at this year’s show. The artist shed his pink and red bellhop suit from the red carpet and instead performed in a more traditional pink and maroon suit, complete with his short blonde wig for his character Igor alongside a team of matching dancers – this as a set of homes burned to the ground behind him. He closed the performance by falling out of sight on stage.

Tyler faces some tough competition in his category as he’s up against Meek Mill’s “Championships,” 21 Savage’s “I am > I was,” Dreamville’s “Revenge of the Dreamers III,” and YBN Cordae’s “The Lost Boy.” The artist holds one nomination this year, but tonight serves as Tyler, the Creator’s third appearance at the Grammy Awards. His previous album “Flower Boy” was nominated for Best Rap Album in 2017. He also received an Album of the Year nom for his work on Frank Ocean’s “Channel Orange.”