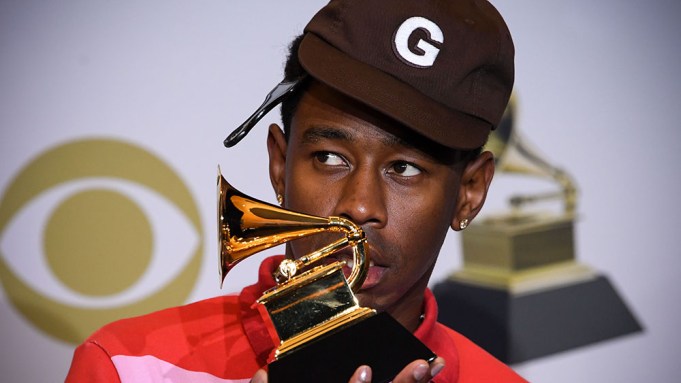 Fresh from celebrating a win for best rap album, Tyler, the Creator took a moment to pay tribute to late NBA star Kobe Bryant and address the elephant in the room — voting transparency — in the press room at the 62nd annual Grammy Awards Sunday night.

“Man, that news was heavy, especially just being here in L.A. at the Staples Center and within a short period of time between him and Nipsey (Hussle),” he said of Bryant, who died in a helicopter crash earlier in the day. “If you’re from Los Angeles and depending what sector you’re in, that s— is really, really heavy.”

On the subject of Grammy voting, he told the backstage crowd that he was torn.

“I’m half and half on it,” he said. “On the one side I am very grateful that what I made can be acknowledged in a world like this… but it sucks that whenever we, and I mean guys that look like me, do anything that’s genre-bending or anything, they always put it in a rap or urban category.”

“And I don’t like that ‘urban’ word,” he added. “It’s just a politically correct way to say the n-word, to me. So when I hear that, I’m just like, why can’t we just be in pop? So I felt like — half of me feels like the rap nomination was a backhanded compliment.”

Earlier in the night, he performed with Charlie Wilson and Boyz II Men for a medley of “Earfquake” and “New Magic Wand.”