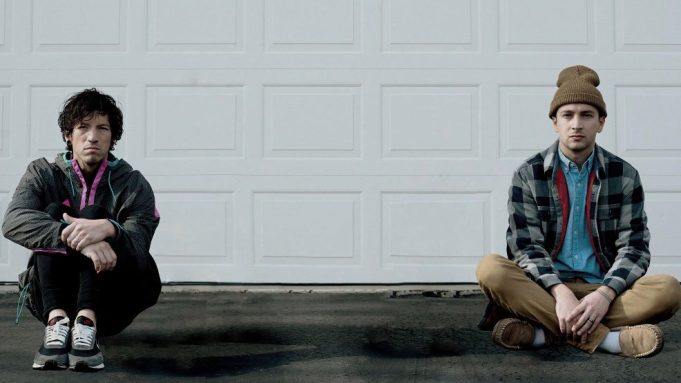 Sheltering-in-place has gone on long enough now that we’re starting to get songs about quarantining that sound fully produced, not like quick novelty knock-offs. That’s the case with Twenty One Pilots’ new release, “Level of Concern,” which the band just dropped to YouTube and most other digital services.

The music video serves as its own making-of, showing the two members of the duo, singer/multi-instrumentalist Tyler Joseph and drummer Josh Dun, individually recording and filming their parts. There is at least some fanciful elements to the documentary aspects, though, as Joseph and Dun are seen loading the audio and video onto hard drive and using back-and-forth snail mail to send each other their parts. Unlikely as that may be as an unexpeditious means of collaborating, the currently beleaguered U.S. Postal Service may appreciate the plug. (The mail motif does pay off with a sight gag at the end, which we won’t spoil.)

Eventually the significant others of the duo figure in, too, for camera-manning and other purposes. The video has Joseph joined by his wife, Jenna Black, and their 2-month-old daughter, Rosie Robert Joseph, who was born February 9. Dun, for his part, is joined by actor Debby Ryan, who helps him festoon his studio space with glow-in-the-dark stars.

The lyrics are somewhat more anxious than the domestically tranquil visuals, with verses that begin:

Panic on the brain, world has gone insane
Things are starting to get heavy
I can’t help but think I haven’t felt this way
Since I asked you to go steady
Wondering, would you be my little quarantine?
Or is this the way it ends?

Any anxiety about finding the right bunker-mate, though, is assuaged by the dance-pop feel of the music, as buoyed by Joseph’s funk rhythm guitar — he said recently on Twitter that it’s the first song he wrote on electric guitar — even before Dun’s beat kicks in.

As with past videos from the duo, direction is credited to Reel Bear Media. Joseph and Dun say they’ll donate a portion of the song’s proceeds to Crew Nation, a global relief fund for live music crews affected by the pandemic.

“Level of Concern” is Twenty One Pilots’ first new music since the release of the “Trench” album in 2018. Their 4-times-platinum “Blurryface” album from 2015 remains the biggest rock album of the late 2010s.