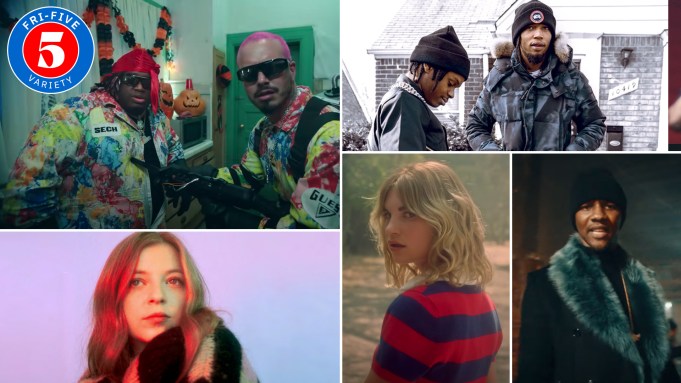 If the way that a person reacts to art has as much to do with the person — what’s going on around and inside them — as the music itself, what on earth does that say about the way we’re reacting to music during this almost unprecedentedly insane week, at a time when everyone’s questioning their version of reality?

We’ve already covered some great escapist music this week — Kylie Minogue’s self-explanatory “DISCO” album and Miley Cyrus tag-team with Stevie Nicks on “Edge of Seventeen”/”Midnight Sky” medley, the topical return of System of a Down — and apparently hip-hop, Jade Bird’s soaring new single and, as a bonus, James Blake’s lovely take on Frank Ocean’s “Godspeed” are soothing or energizing our nerves today.

Jade Bird “Headstart” This 23-year-old British singer has been bubbling under for the past couple of years and was all set to make her big breakthrough album with top Nashville producer Dave Cobb, when the pandemic hit — but they figured out a way to make it anyway, and this song is the first result. It’s a two-and-a-half minute showcase of all of this stellar singer’s strengths, starting quietly and subtly before it bursts wide open on the chorus. There, Bird shows off just what a nuanced singer she’s become, belting with her crystal-clear voice but putting just a hint of a scratch in it, a deliberate imperfection that gives the song its grit.

42 Dugg “Free Woo” This rising Detroit rapper brings some heartfelt sentiment to the second single from his forthcoming album, which pays tribute to an incarcerated friend, but what really makes the song move is his spiky but fluid flow, which drives the song as much as the skipping beats from, naturally enough, FlexOnDaBeat. The single follows Dugg’s appearance on the BET Hip-Hop Awards last month, when he kicked off the show performing “We Paid” alongside Lil Baby.

Sech + J Balvin “La Luz” Yeah okay so Halloween was last week and the Panamanian rapper Sech and everyone’s favorite collaborator, J Balvin, premiered this song on the latter’s special concert in Fortnite, but the official song and video dropped this week and it deserves its place in the sun. As if this week hasn’t been spooky enough, check out what the Ghostbusters-themed duo encounters in the video.

Amy Allen (featuring Pink Sweat$) “What a Time to Be Alive” There have been plenty of well-intended songs released into the chaos of the past few weeks, months, years — but dropping a song like this at a time like this has paid off. Amy Allen is best known as a hit songwriter and producer for artists like Harry Styles, Selena Gomez, Halsey and Shawn Mendes, but she’s obviously an accomplished singer in her own right, and Pink Sweat$’ strong contributions here help push the song into greatness. “This song is a call to action and a cry for help,” Allen said in the song’s press release. “It’s a song about what we’re leaving to future generations, asking what we’re doing to ensure a more beautiful, more safe and more sustainable planet.” Pink Sweat$ added, “‘What A Time To Be Alive’ is a record that a lot of people need to hear right now. We seem to have forgotten that the best version of yourself is a product of how you elevate those around you, and I’m grateful to be able to stand by that message alongside a true friend.”

Giggs “Buff Baddies” While writing about a song that’s sung in a language you don’t understand is hard enough, the same applies for slang, and speaking honestly, we have no idea what some of the terms in this song mean, but it sounds great. South Londoner Giggs has been releasing music for a dozen-odd years but this track from his new album, “Now or Never,” finds his warm voice and unusual flow lining up with some deceptively aggressive lyrics — if you’re looking for De La Soul’s evil twin, it might be here.