The Christian singer-rapper twice spoke with the audience about his son's recent death, and performed his personal eulogy, "21 Years." 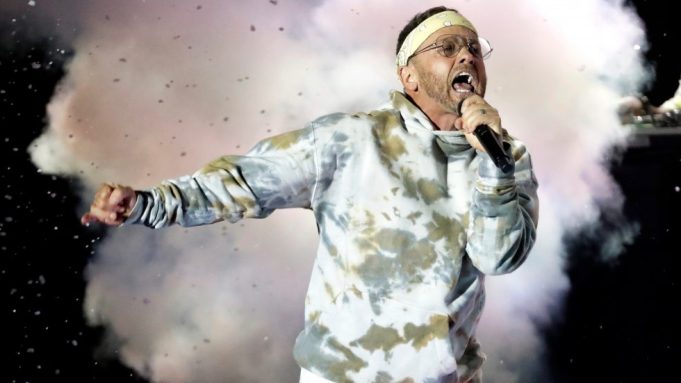 TobyMac was not about to make anyone wait for him to address the elephant in the room as he started his set Saturday night at L.A.’s Forum. Ten concerts deep into his “Hits Deep” arena tour, the Christian singer-rapper was clearly aware that fans want to hear him speak sooner rather than later about the October death of his adult son, Truett McKeehan.

TobyMac has a new ballad he released about Truett’s passing, “21 Years,” which naturally was embedded a little deeper into a show devoted almost entirely to high-energy pop-R&B. So he spoke about it at the top of the show, as well as when he came back to introducing his musical eulogy five songs into the set.

Saying that he’d recently been through the darkest days of his life, the six-time Grammy winner told the sold-out audience, “I just want to start out by telling you it’s been really hard. But I want to thank you for the letters that have been sent to us, the cards, the social media posts to encourage us — but mostly, I want to say, thank you for the prayers. And I know by no means are we the only ones going through something hard. I know you guys are going through your own pain and heartache and loss.

“And a friend once told me this: ‘When you experience something like that you’re going to start reaching for things that you think are the promises of God… but maybe they weren’t things that God promised at all. He didn’t promise us that we wouldn’t experience heartbreak or pain or loss.’ But he said, ‘Make sure you find what he did promise us. And that is that he will never leave us or forsake us.’ I’m hanging onto that promise for myself and you as well as my son. And I just want to say, we came from Nashville to love on you guys with some music. So let’s do that.”

With that, he went into what was arguably the only other dramatic or darker song, besides “21 Years,” in a show that otherwise largely constituted a nonstop inspirational party: “The Elements,” which had TobyMac hooded on the center stage, slugging against an invisible foe, as if in a boxing ring, while faux snow fell over the middle of the Forum.

A few more upbeat songs into the concert, TobyMac returned to the subject on fans’ minds, giving what nearly amounted to an altar call as he spoke about his thoughts since Truett’s accidental overdose. (His 21-year-old son died at home Oct. 23 while his father was away on tour, with the cause of death finally revealed Jan. 22 as due to cardiac arrest from an overdose of fentanyl and amphetamines. Fentanyl has become the leading cause of ODs in America, and has been cited in  the deaths of such music figures as Tom Petty and Prince.)

“A lot of people have come up to me and said, ‘You know what, Toby? You’re gonna see him again.’ And I believe that with all my heart. I truly do,” he said, walking down the ramp through the arena’s pit area. “But the question is, why? Why do I get to see him again? Because his goods outweigh his bads? No. Nah, he was my wild child. His good didn’t outweigh his bad, just like my good doesn’t outweigh my bad. I get to see him again for one reason: ‘For God so loved the world that he gave his only begotten son that whosoever believeth in him shall not perish, but have everlasting life.’ I’m holding onto that,” he said, invoking the New Testament’s most quoted verse, John 3:16.

“The truth is, that is a gift. That is a gift to me, and it’s a gift to my son. But it’s also a gift to you. And I ain’t no preacher, but listen, you have to accept that gift to make it yours. I don’t know where you stand in all this, but man, if you want to look into that gift and accept it, then do it tonight, even on your pillow. I know my son accepted that gift because we spoke of it many, many times. The truth is, God gave his firstborn son so that I could see my firstborn son again.”

From there, he went into “21 Years,” which has inspirational lines such as “God has you in heaven, but I have you in my heart,” but also poignant ones like: “You said you’d turn, you would turn it around / Thought that you had time to straighten it out / Told me that you were my prodigal son / But this isn’t home.” The song ended with an extension of the prodigal son theme — “Did he see you from a long way off / Running to him with a father’s heart” — as Luke 15:20, the biblical verse from which that thought was taken, appeared on an overhead screen.

The new song then segued into “See the Light,” a prophetic-feeling song about faith tested from TobyMac’s year-old album, “The Elements,” in which he sang, “Some things will never be the same / Some things are only for a season / And just the thought of letting go / Well, it’s brought me to my knees / But if you can make it through the night / I can promise that the sun is gonna rise.” Backup singer/wingman Gabe Real Patillo sang some of the lyrics, tapping TobyMac on the shoulder as if to remind him of his own words.

From there on in, the show returned to and stayed in Christian party mode, not unlike an evangelical version of a Justin Timberlake set. Although the show veered into genres like reggae (“Lights Shine Bright”) and anthemic rock (“Eye on It”), the dominant mode was soul-pop, invoking the feel-good R&B of the ’70s, ’80s and ’90s — a throwback mode maybe made easier to fall into by how much TobyMac’s frequent duet partner, Terrian Base, resembled a young-and-innocent Whitney Houston.

The “Hits Deep” show was actually hours deep before TobyMac ever hit the stage, as the tour features six additional acts, Tauren Wells, Jordan Feliz, We Are Messengers, Ryan Stevenson, Aaron Cole and Cochren & Co., several of whom joined the headliner for cameos in his set, in numbers like the show-closer “Feel It” (below).

The tour, which began Jan. 30, runs for another six weeks. Remaining dates: