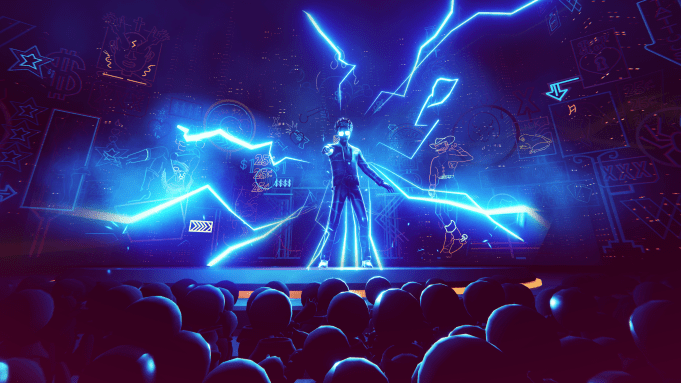 The Weeknd took TikTok viewers to another dimension — and gifted them with a snippet of a brand new song — during “The Weeknd Experience,” an augmented reality, interactive livestream held on the platform Friday night (Aug. 7).

With the music industry currently inundated with a slew streaming events and performances, The Weeknd’s record label XO, along with Republic Records and WAVE, Scooter Braun’s virtual concert start-up, joined together in hopes of giving viewers a truly unique experience. Advertised by TikTok as the “first-ever in-app cross reality experience,” the 20-minute performance featured state-of-the-art three-dimensional visuals and several interactive components, allowing an audience of over 230,000 to affect certain outcomes.

The result was an exciting, immersive experience that many virtual events have failed to evoke. Though the performance was short — only featuring five songs — the fiery, futuristic, hell-like world it took place in was interesting enough to keep viewers satisfied and captivated.

The Weeknd appeared on the virtual stage in avatar form, emerging out of a fiery blaze and sporting the oversized sunglasses and red jacket that have become synonymous with his latest album, “After Hours.” Three-dimensional meteors fell around him as the synthetic beats of “Pray For Me,” his collaboration with Kendrick Lamar for the “Black Panther soundtrack,” rang out. As the song played, a prompt appeared for viewers to fill the chat with comments, and a select few were chosen to light up the dark sky against a city skyline.

Fans were then treated to a 30-second snippet of an untitled new song, which was reminiscent of his earlier, more stripped-down projects. However, the audience was soon distracted by a new prompt, asking whether or not The Weeknd should lick a frog that had suddenly appeared in his hands. (For those unfamiliar, toad venom contains psychoactive properties that cause those who ingest it to hallucinate.)  Naturally, the chat filled with an unanimous “yes,” and The Weeknd’s avatar followed suit. Though the stream seems to have run smoothly for most, several TikTok users alleged that at this point the app crashed due to the massive amount of people attempting to vote on the frog question.

The toad trip segued right into “Blinding Lights,” The Weeknd’s smash hit that skyrocketed to further fame on TikTok with a viral dance challenge. Back-up dancers appeared behind The Weeknd and performed the challenge as more fan comments were plastered on billboards surrounding the singer. The 3D visuals went into full effect as The Weeknd traveled through hyperspace in a red convertible, surrounded by dizzying lasers that lit up the virtual world.

A pause in the performance gave time for viewers to choose the theme for the next song: “fire” or “spark.” When the winner was revealed to be “spark,” The Weeknd’s avatar was struck by a lightning rod that turned his glasses from red to blue and the world from a fiery pit to an electric sea as “In Your Eyes” began to play. When it came time for fellow TikTok hitmaker Doja Cat’s verse, she also appeared in virtual form, dressed in a cat costume from head to toe.

“Save Your Tears” was the last song of the experience and led to an abrupt halt with a prompt asking viewers to help The Weeknd “blast off” by commenting in the chat. After zooming through space in the convertible once again, the car came to a stop and was left suspended in mid-air, with The Weeknd nowhere to be found. Instead, a larger-than-life version of the singer emerged to replace the avatar, watching over the city in a cinematic end to the stream.

Merchandise exclusive to the event is also available on The Weeknd‘s website, with all proceeds benefitting the Equal Justice Initiative.