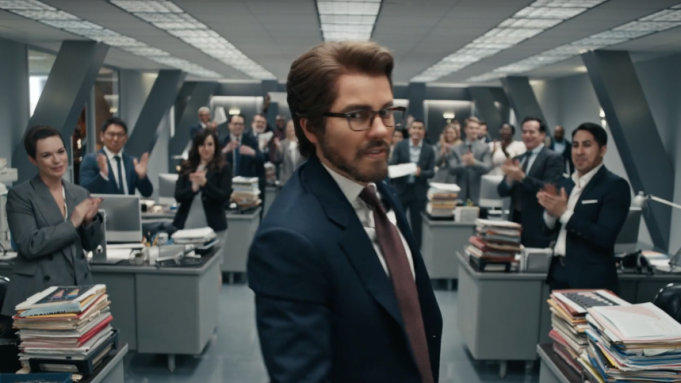 Taylor Swift gets a prosthetic makeover for what turns out to be the title role in “The Man,” her self-directed music video for the feminist-themed song of the same name from her “Lover” album.

At the end, the bearded white-collar executive character is given a voice — and it’s Dwayne Johnson’s, the credits show. But that’s all Swift under the latex, as the credits further reveal, with photos of the transformation that leaves the singer all but unrecognizable as she swaggers her way to the top.

Male privilege, in the video’s scenarios, includes acting out some of the song’s alpha dawg-questioning lyrics, like “getting bitches and models” and cavorting with them on a yacht to “be just like Leo, in Saint-Tropez.” It also involves peeing upright in the subway station, and (further trigger alert) manspreading on the train.

At the end of the clip, the real Swift and the latex-laden, manly one intersect on the set-within-a-set of “The Man,” as the singer, in her role as the video’s director, gives her bearded persona some advice about his performance. “Hey, just checking,” says the voice of Johnson, “was that last take what we had in mind?” “Pretty good — ah, could you try to be sexier, maybe more likable this time?” She then calls to a woman on the set, “By the way, good work over there, Lauren, that was astonishing.”

Swift had made a point, when she alerted fans to the coming video earlier in the week on social media, of pointing out that there were 19 hands her character passes by as “he” walks down a hallway. The singer didn’t do anything immediately after the video’s release to confirm the meaning of that number, but fan speculation has led down a couple of halls: Swift, now 30, was 19, they point out, when Kanye West famously came on stage and took the MTV VMA trophy out of her hands. Or, in an alternate but not necessarily conflicting explanation: It was the 19th amendment to the Constitution that gave women the right to vote.

On the opposite end of the video or musical extravagance spectrum, Swift previously released a “Live from Paris” acoustic music video to tease the new single.