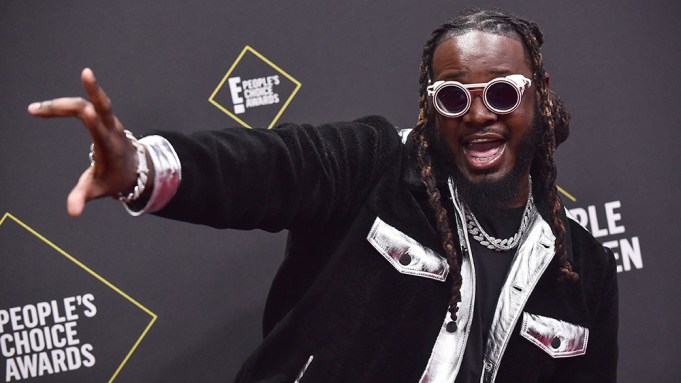 T-Pain has been thinking a lot about TP lately.

“I finally found out that my wife poops,” the artist joked from his isolation at his home in Atlanta during a “Variety Live!” interview. “We’ve been married for 17 years, but I think she waits to poop until I go on the road. Now that I haven’t not been on the road, she’s just gotta do it, so that’s pretty interesting.”

T-Pain canceled scheduled tour dates late last year and, due to the pandemic, isn’t currently on the road, he’s still maintaining his presence in the hip-hop world. Earlier this month, T-Pain went head-to-head with the fellow southern rapper Lil Jon on Instagram live in an epic, hours-long “Verzuz” battle of each other’s hits.

“What we’ve been talking about is taking that playlist from the battle and trying to apply it to a tour,” the rapper said. He added that the post-pandemic tour would also include appearances from Usher, Ludacris, Pitbull and others.

While there’s no name for a Lil Jon, T-Pain and friends tour just yet, the “The Masked Singer” Season 1 winner is mulling over a couple of options.

“We might call it ‘The Jonathan Tour,’” he said. “’Crunkchella.’ We’ve also floated that around.”

Like many musicians, he has been using social media to stay connected and creative. He recently launched the #tpainsongwritingchallenge on TikTok, where musicians are encouraged to make a song and video based on homemade beats he posts on Instagram. Grammy award-winning mixing engineer Fabian Marasciullo mixes and masters the best submitted track for free.

“I hate to sound like a broken record –I know people have heard this phrase too much in the past two months — but in these trying times [laughs], I feel like giving back and releasing some of the love,” T-Pain said. “I’m not gonna use the beats. These are like therapy beats for me. I’m making them just staring at my computer, so why not let somebody get some shine off from it, not spend a ton of money and come out with something great from this quarantine.”

Leveraging his social media popularity in music has been just another step in T-Pain’s evolution, once an artist known mostly for his use of Autotune in club bangers from the 2000s, like “Buy U A Drank” and “Bartender.” Now, he’s dropping jaws with his dulcet tones and winning big on “The Masked Singer.”

On April 24, he dropped his first independently released single, “Wake Up Dead,” the title of which was inspired by one of his favorite movies, “Scary Movie 3.” In the past, he’s talked about how pressures from his management and label caused him to retreat from music almost entirely. But now, his (auto)tune has changed.

“I used to always talk about how the industry held me back, how my management wouldn’t let me do things, and I think it was more me allowing that to happen,” he revealed. “The one thing I’ve never talked about is putting the blame on myself for allowing my life to go like that and allowing myself to succumb to authority.”

The freedom to create independently is ideal, he says. “There’s no comparison to be able to just drop and actually get out my ideas. I always used to tell my management and my label, ‘If my music career gets messed up, let me mess it up. Let me do it. I want the decision that messed up my career to be mine. And I want the one that takes it to the highest level to be mine, as well.’”

On the music front, he’s working on an album of covers, appropriately titled “On Top of the Covers.” He’ll be lending his vocals to classics outside of hip-hop, including Frank Sinatra’s “That’s Life,” Black Sabbath’s “War Pigs” and Dr. Hook’s “Sharing the Night Together.” The plan is to cobble together a tour that includes some of the top cover bands in the country.

He also continues to build up his Nappy Boy Entertainment outfit, signing new artists and developing its gaming division. A self-proclaimed nerd and avid gamer, he has been hooked on Nintendo Switch game “Animal Crossing: New Horizons,” where users build their own island societies. He has even found a way to give back there.

“I’m giving away free turnips. I’m giving back to the community in a big, big way,” he said with a laugh. “Get some turnips and turn up.”

Watch the full interview with T-Pain on “Variety Live!” above.