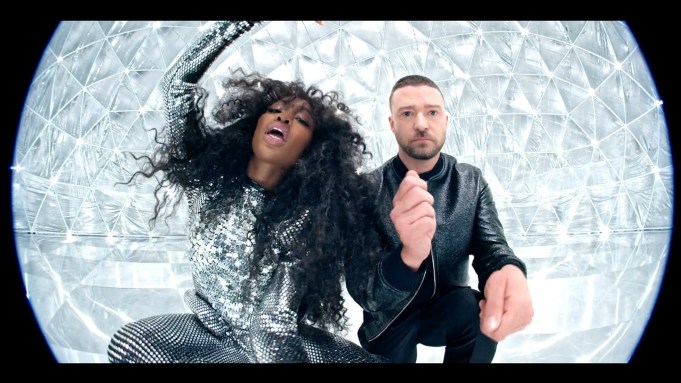 SZA and Justin Timberlake released “The Other Side,” the first song from the upcoming “Trolls World Tour” soundtrack.

Of course, Timberlake’s Grammy-winning 2016 hit “Can’t Stop the Feeling,” from the first “Trolls” film, was one of the most massive hits in a career filled with them, and like that song, this one involves co-writer Max Martin — the biggest hitmaker of the past 25 years — and sounds like it could be just as big.

The eye-catching video — a throwback to Hype Williams’ 1990s fish-eye-lensed clips for Missy Elliott, Diddy, Mase and others — adds to the song’s appeal, and includes some comic elements as well: Watch for the moment when SZA wipes out on her towering heels.

The track was written specifically for the film by Justin Timberlake, Martin, Ludwig Göransson, Sarah Aarons and Solana Rowe (SZA) and produced by Timberlake and Göransson.

“The Other Side” is the first single to be released from the upcoming “Trolls World Tour (Original Motion Picture Soundtrack),” which will be available on March 13 via RCA Records. Timberlake  returns as the executive music producer alongside  Göransson, and contributed several new songs, along with tracks from Kelly Clarkson, Anderson .Paak, Mary J. Blige, Anna Kendrick, George Clinton, Dierks Bentley, Anthony Ramos and more (full track list below).

“I was so thrilled to be invited to participate in this project with Justin,” said SZA. “The creative process of working with him and the team was filled with such excitement. It’s an energy you can feel in both the song and music video. I can’t wait for people to check it out.”

“It has been such a fun process writing and executive producing for this project,” said Timberlake. “Being able to bring together different creatives from various disciplines and genres has been the most rewarding part. Creating something that serves the movie while still being able to exist apart from it has been a fun challenge that was made even more exciting by working with the other amazing artists that helped us put this together.”