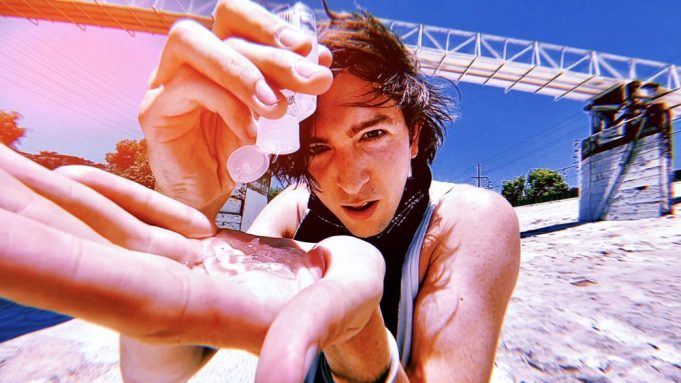 Emmy-nominated actor Nicholas Braun, who plays the beloved character Cousin Greg on HBO’s “Succession,” is following in Kendall Roy’s footsteps by trying his hand at music.

Braun released a song called “Antibodies” earlier this week. Inspired to write the tune during the coronavirus lockdown, he crowd-sourced lyrics via Instagram, asking musicians to help with verses to the melodies he had stuck in his head.

After an overwhelming response, the music, lyrics and video (watch it above) came together. Variety caught up with Braun to talk “Antibodies” and whether he sees a musical future for Cousin Greg on the show, which won an Emmy for last year — and is nominated again — for outstanding original main title theme music.

Totally! I was staying at my friend’s guest house in LA and I wasn’t posting a lot of stuff. But I had this idea and thought, ‘Maybe this is stupid or maybe other people will think it’s funny and ridiculous.’ All of a sudden, antibodies is in our vocabulary and has become this part of our verbiage. Before this, no one really talked about it, when you get the flu, you don’t talk about antibodies.

So, I put it up and people started responding to it immediately. Within ten minutes, someone had sent me a version on their keyboard. Others were asking what genre I wanted it in and were telling me what instruments they could play. Once people started doing it, I saw how it was giving them something fun to work on.

It’s such an earworm, and I mean that in a good way in that it makes you smile. How fast did it come together after your call for submissions?

The chorus happened once people started putting up versions and I saw how it could be a full song. There’s so much to talk about in this pandemic: What’s weird and uncomfortable? If it’s a romantic song, what’s it like dating somebody? You want to feel safe and know if they’re clean — whether their blood has the antibody. And once you put blood in a lyric, it felt like a punk song after that.

Were you always into Punk and EMO? Who were some of your influences growing up?

I was listening to Blink-182, No Doubt, Sum-41 and Papa Roach. I had a Dashboard Confessional and Mars Volta phase. It wasn’t the only genre I liked — I had this R&B side, too. I was obsessed with Lauryn Hill and I even had a [pet] named after her.

With the video, you shot that around the L.A. River on an iPhone. How did that come together?

I knew I needed to make a video as the song came together because it was turning out well, and had all these ideas of punching a wall, breaking sticks and being in the middle of the river shooting it. I didn’t have a record deal or anything, and I had to shoot it for no money.  So I asked Akiva Schaffer (“Hot Rod”) if he wanted to direct it, but he has a family and it was too crazy back in May to do it. Still, he was a great resource to bounce ideas off of. I’d send him my whole deck and we collaborated.

I reached out to my buddy Hunter and asked him for eight hours to help film me at the river. It was just an iPhone, a tripod, hand sanitizer and some eyeliner.

People want more music from you. Would you consider doing an EP or releasing more tracks?

We are hoping to release a couple more versions of this song. I’m not sure if I’ll be on all of them, but I do want to hear other bands interpret it. Hopefully, we can roll out an EP of “Antibodies.” I love making music and would love to make more. If it works with the way the world goes and if I can fit it in, then I’m going to do it.

Would Cousin Greg ever do something musical on the show?

I feel that would change Greg in a way, but maybe there’s a karaoke scene where Greg has pipes or something. I talked to Nick [Britell, “Succession composer] about “Antibodies” it and played it for him a month ago. He said, “Dude, this is crazy.” He’s been fun to talk to about music and has been super supportive. He helped me shop for a piano earlier this year. Maybe there’s a collaboration between him and me, but I don’t know if it’s as Cousin Greg.

And the proceeds from the single are going to Partners in Health and COPE?

They’re both great organizations. When we were going to put the single out, I wanted to pick charities that dealt with Covid-19.

Partners in Health is a global organization, and COPE deals specifically with the Navajo Nation in the United States which is having the most difficult time. They have the highest death rates and don’t have access to quality health care.

A part of the proceeds will go towards these organizations with every stream and every play on YouTube. Put it on repeat while you go to sleep or put it on a playlist and you’re donating money.

I have to ask, do you have the antibodies?

I have to admit I do not have the antibodies. I thought I had the antibodies because I was pretty sure I had Covid after Sundance and I was wrecked by something. But I don’t have them.

You also received your Emmy nomination this week on top of dropping the single. How was Emmys morning for you?

It didn’t feel real. I couldn’t believe it and it took me the whole day to understand. I went on the website and saw my name and it was there. I feel honored and excited to be with Matthew and Kieran in that category.

We’ll be having a virtual Emmy’s this year.

I’m not bummed about it. I think it’ll be fun. It’ll be something we look back at 10 years and say, ‘Remember that weird, virtual Emmys?’ I’m going to wear a tux and I’m gonna get a haircut for the first time in the quarantine.

Do people come up to you and call you Cousin Greg?

People call me Greg on the streets and even people I know well sometimes mistakenly call me Greg. It’s kind of weird. I don’t know what to do, but come on, you know my name?