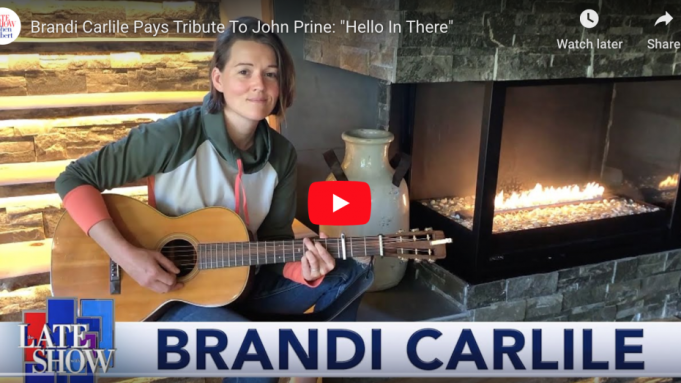 Stephen Colbert did not have to bone up on John Prine to pay tribute to the late singer. As he explained on Wednesday night’s telecast of “The Late Show with Stephen Colbert,” sharing Prine’s music was an early bonding experience between him and his wife-to-be, and he even studied and learned songs of his when he attended (probably alone, among leading TV talk hosts) folk music school.

Prine had appeared with Colbert a number of times and they’d even sung together, and in the singer’s absence now, the host had to turn to an even bigger superfan, Brandi Carlile, to give the late-great his proper late-night due. Carlile sent in a recording of herself sitting on steps by the fire singing one of Prine’s signature numbers, “Hello in There,” probably the most popular song about senior citizens this side of “Eleanor Rigby.” (Watch, above.)

“I have been asked to record one of John Prine’s songs for tonight, and it’s a great honor for me,” Carlile said on the telecast. “I’ve been thinking long and hard about it, because there are so many amazing and powerful messages that John Prine has left for the world. And for the people who weren’t familiar with his music, they’re about to get a whole lot of truth dropped on ‘em, which I am really happy about, at least. But I think that this is a song that John would have liked me to sing, because this song refers to the people that we’re all staying home to protect, and it reminds us that older people aren’t expendable — that they made us who we are and they’ve given us every single thing that we have. Even though John never got to get old, and we all would have liked for him to, at the age of 24 when he wrote this song, he understood this.”

Introducing the performance, Colbert sighed at the thought of Prine’s death. “There’s too much to say,” he said. “I first really got to know John Prine’s music when my then-girlfriend, now my wife, sent me her first cassette tape when we were dating and it started with ‘Paradise’ by John prine. I loved that song, and I loved her for showing it to me. I learned it on the guitar so I could play it over the phone to her, because we were living in different cities.

“I started studying at the Old Town School of Folk Music, where I was happy to learn that John had been,” Colbert continued. “I learned to play ‘How Lucky’ and learned from him in that song how to be grateful for the things I don’t remember about childhood. And talk about lucky: I learned to know John Prine. I got to meet him, I interviewed him, I sang a song for him with John Dickerson; I sang a song with him, which I think some of y’all have seen. And I got to know a lot of people who also loved John — guests on the show: Dave Matthews, Sturgill Simpson, Brandi Carlile. And actually in 2018, Sturgill and Brandi came on the show with John Prine to sing with him.” (See clips of those appearances, below.) “And tonight I’m glad to say that Brandi Carlile is back to sing one of John’s songs for you and tell you a little bit about what he meant to her.”

Carlile had already paid late-night tribute to Prine on her own, staying up into the wee hours Wednesday morning, hours after news of his coronavirus-related death stunned fans around the world, to post an Instagram video of herself performing “Summer’s End,” the then-new song she’d sung with him on Colbert’s show in 2018.

“Hello in There” was recorded by Prine for his self-titled debut album in 1971, and was more widely heard when Bette Midler covered it a year later on her smash “Divine Miss M” album. Others who have subsequently recorded the tune include Joan Baez, Kris Kristofferson and 10,000 Maniacs.

Prine talked about the song in an interview with Performing Songwriter magazine. “I’ve always had an affinity for old people,” he said. “I used to help a buddy with his newspaper route, and I delivered to a Baptist old people’s home where we’d have to go room to room. And some of the patients would kind of pretend that you were a grandchild or nephew that had come to visit, instead of the guy delivering papers. That always stuck in my head. It was all that stuff together, along with that pretty melody. I don’t think I’ve done a show without singing ‘Hello in There.’ Nothing in it wears on me.”