The band's much-derided appearance ensured that the line "I ain't the sharpest tool in the shed" was destined to be the most quoted classic-rock lyric of the following day. 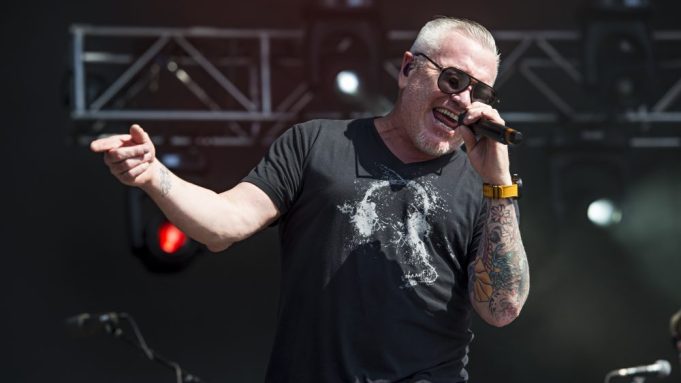 In playing at the Sturgis Motorcycle Rally Sunday night, the band Smash Mouth did not feel any need to avoid the elephant in the room, which would be the fears of outsiders — and apparently few in attendance — that the socially un-distanced gathering could be a breeding ground for a coronavirus “super-spreader event.”

“F— that COVID s—!” singer Steve Harwell could be heard telling the crowd in video footage. “Now we’re all here together tonight.”

Smash Mouth appeared cheerful about going on with the show, although several of the best-known acts that had been destined to perform at the 10-day gathering had pulled out, including Willie Nelson, ZZ Top and Lynyrd Skynyrd.

The television station that aired the Smash Mouth footage, South Dakota’s ABC affiliate KOTA, reported Monday that organizers were expecting 250,000 people from around the country to attend the event overall, although it wasn’t clear how many thousands were in the audience for the band’s performance Sunday.

Here is a brighter video to see all the people (credit KOTATV) pic.twitter.com/P7XW46BLiS

Smash Mouth’s manager, Robert Hayes, did not respond to Variety’s requests for comment. He did, however, release a statement to Billboard, saying, “We spent endless hours advancing this event to make sure that it was pulled off as safely as possible and we are very happy with the outcome.” Hayes added that the gathering “had a very strict social distancing and mask policy in place for all workers,” and that “everything backstage was sanitized.”

The band has had nothing to say about the show on social media, with nearly 100% of its recent tweets being sports-related.

Naturally, the sight of the group playing for an audience of unprotected thousands led to immediate wide-scale quotations of the lyrics of Smash Mouth’s biggest hit, “All Star,” on social media — most especially the infamous line “I ain’t the sharpest tool in the shed,” but also “Your brain gets smart but your head gets dumb,” “You’ll never know if you don’t go,” “My world’s on fire, how about yours,” and the possible mission statement for a maskless generation, “Didn’t make sense not to live for fun.”

With a week still to go in the event, the Sturgis rally has already become renowned for hosting perhaps the largest mask-free crowds in the country since the pandemic began — despite a survey of local community residents showing that 62% wanted the city to postpone the event.

USA Today reported that shirts being sold at the gathering included those reading: ““Screw COVID,” read the design on one T-shirt being hawked. “I went to Sturgis.”

Although the largely rural area is not one of the top hotspots for coronavirus spread in the country, KOTA reported that South Dakota has had 9,663 cases, including 59 new diagnoses being added to the tally Monday.

The hundreds of thousands of out-of-state visitors are being encouraged to practice social distancing protocols but reporters on the scene say there is no pretense of that. “Harleys everywhere, masks nowhere,” read the headline on KOTA’s site.