"Who the f---'s Post Malone?" Osbourne remembered asking his daughter, about one of the new album's celebrity guests, at a listening party for fans at SiriusXM's studios. 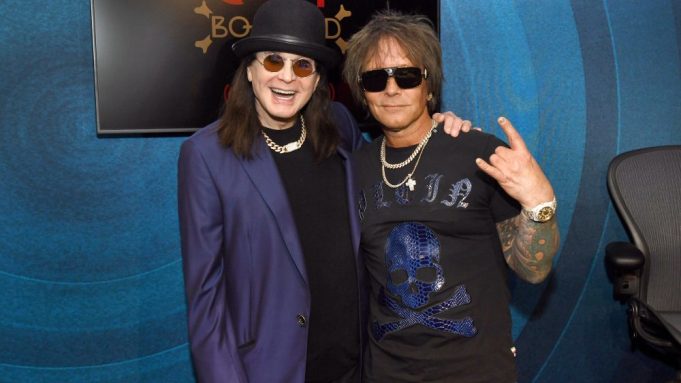 It’s probably no surprise to anyone that pain continues to inspire Ozzy Osbourne.

“Someone told me writers come up with the best stuff when they’re miserable. And I was pretty f–king miserable,” Osbourne said about his upcoming album, “Ordinary Man,” to the 30-plus fans gathered at SiriusXM’s live music space in Hollywood on Feb. 13 — the same date as the 50th anniversary of Black Sabbath’s eponymous genre-defining debut album.

Fans were treated to a track-by-track preview of Osbourne’s first studio album in 10 years, which he completed with Duff McKagan (Guns N’ Roses), Chad Smith (the Red Hot Chili Peppers) and Andrew Watt (the record producer and guitarist who’s worked frequently with Post Malone). Other heavy-hitters are also featured, including Tom Morello, Slash and Elton John.

The listening session was followed by an interview with Osbourne and Watt in-studio, along with McKagan joining them from Seattle. Conducted by SiriusXM personality and “Ozzy Speaks” co-host Billy Morrison (pictured above, right), it will air as a special on the satellite radio service’s Ozzy’s Boneyard channel on Feb. 20.

In the gem-filled chat — which included the revelation that Osbourne once thought Spotify was the name of a disease — Osbourne and company reveal that the album came together at breakneck speed: McKagan said that after touching base with Watt, a friend of Osbourne’s daughter Kelly, they linked up with Chad Smith for a four-day workshopping session. The three wrote songs and riffs, crafting where they anticipated Osbourne’s vocals would fit and leaving room for superstar guest appearances.

“Sometimes you just have to believe in fate that brings people together,” said McKagan, who took the gig while on a brief break from touring with GNR.

Watt said he sealed the deal to produce, play on and co-write with Osbourne over a celebratory dinner of spaghetti with cream sauce and two scoops of caviar — what Watt said Osbourne refers to as “rock star food.”

The result is a a 10-track album written in three weeks, rife with Osbourne’s signature wails, stinging metal flourishes and nods to Osbourne’s personal favorite, the Beatles (notably on the track “All My Life”). Even though Osbourne is the godfather of metal, the album features a song with chart-topping sensation Post Malone, with whom Osbourne scored a hit with last year on the song “Take What You Want.” Osbourne credits his daughter for introducing him to Malone, recalling the story in the most Ozzy way possible.

“Kelly came home and said to me, ‘Dad, a friend of mine wants to know if you’d sing on a Post Malone [song],'” Osbourne recalled. “I said, ‘Who the f—‘s Post Malone?'”

Almost all tracks on “Ordinary Man” were done in one or two takes, which Osbourne said he appreciated, contrasting it with what he remembers from working with Rick Rubin on Black Sabbath’s “13.”

“He made me sing the songs 50 f—ing times,” Osbourne recalled, to audience laughter.

As for the “miserable” part: Last month, the three-time Grammy winner revealed to “Good Morning America’s” Robin Roberts that he was diagnosed with a form of Parkinson’s disease. He postponed his 2020 world tour to recover from a neck injury from a fall in 2019, and told Roberts that he had been recovering mostly at home ever since. It is unclear whether or not he will continue to tour.

Seven years sober, which he cheekily called “f—ing boring,” Osbourne said that doing this album has been healing.

“Doing music,” Osbourne observed, “is the best medicine I’ve had.”

“Ordinary Man” debuts Feb. 21, the day after the special airs.