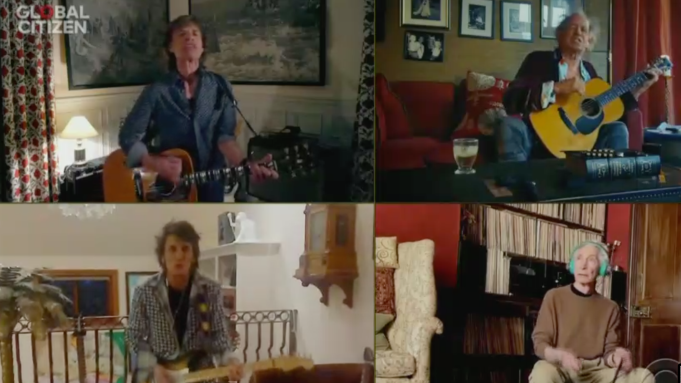 Nearly 60 years into their collective existence, it’s rare for the Rolling Stones to do something musically that they haven’t really done before — but that certainly happened on Saturday night for their performance of their 1969 classic “You Can’t Always Get What You Want” on Global Citizen’s “Together at Home” concert.

Performing via a four-way split screen, the song started off with Mick Jagger singing and playing acoustic guitar; then joined by Keith Richards, also on acoustic; then Ronnie Wood on some stinging electric lead; and finally Charlie Watts, who drummed on a black box, but didn’t even pretend to be actually playing, hitting invisible cymbals somewhere in the region of an armchair to his right.

Obviously some if not all of the song was pre-recorded, but the Stones worked it for all it was worth — and showed off plenty of the stagecraft that the septuagenarian group has brought to stages across the world every year since 2012.

Still, it’s not quite what Stones fans had expected to see this year: The coronavirus pandemic forced them, along with virtually every other act on the road, to postpone their 15-date 2020 North American tour, which was scheduled to start on May 8 in San Diego and wrap in Atlanta two months later.

“We’re hugely disappointed to have to postpone the tour. We are sorry to all the fans who were looking forward to it as much as we were, but the health and safety of everyone has to take priority,” the group said in a statement.