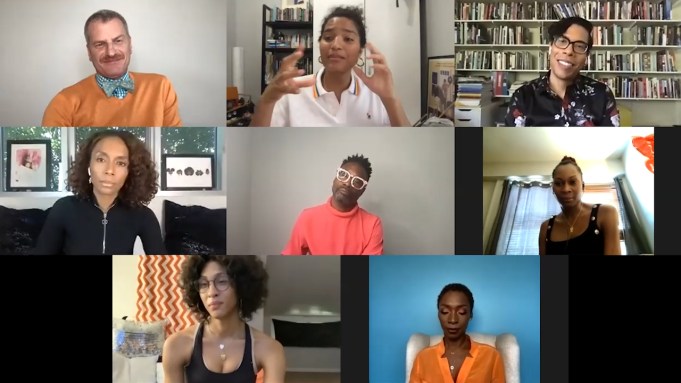 Shooting Candy’s funeral scene on season two of “Pose” resonated in many ways with the cast and crew.

Candy, played by Angelica Ross, was murdered by a john in a seedy motel room during the season’s fourth episode.

Her funeral was filmed the same day the cast found out that a 23-year-old Black trans woman named Muhlaysia Booker was shot and killed in Dallas a month after cellphone footage showing a group of men attacking her made national news.

“Before we started filming, I brought into the room with me — into the funeral scene — a list of names. Before we started filming, I read all of the names of the trans women who had died that year,” Ross said while tearing up during Variety’s Virtual TV Fest’s “Pose” panel. “I brought their names into the space and I encouraged everyone to just use this moment to be cathartic.”

Mj Rodriguez’s character Blanca was tasked with telling Candy’s estranged parents that their daughter had been killed. “It was extremely hard for me,” Rodriguez said. “It was emotional. There were times even outside of the scene where there was setup, I would watch and look at the casket and cry. It just triggered a lot of things that happened to a lot of women like us. It was a hard scene for me just delivering it, let alone seeing it.”

Indya Moore started seeing a therapist shortly before the pandemic, saying it helped with telling the emotional stories on the show. “I started therapy for the first time in — I don’t know how many– years. I can’t remember, since I was 16,” said Moore, who plays Angel. “That’s been really helpful in helping me sort out so much. That’s a lot that we hold and carry and come from and bring from our experiences to tell these stories.”

As hard as the funeral scene was to film, it ended as a celebration. The funeral home opens to the ballroom, where Candy gives a final performance by lip-syncing Stephanie Mills’ 1980 hit “Never Knew Love Like This Before,” which is also the title of the episode.

Janet Mock, who co-wrote the episode with Ryan Murphy, said it was important to show “the epidemic of violence that trans women of color faced and continue to face,” but they also wanted to celebrate Candy “as the star that she always personally advocated herself to be.”

Dominique Jackson, who plays Elektra, said the ballroom community has traditionally turned to performance as a tool for healing. “The one thing about that episode and the way that Candy’s sendoff spoke volumes is the fact that our community usually comes together at drag bars and stuff like that for church,” said Jackson. “In this kind of manner, we actually tapped into the survival of a lot of trans women, which is having to do performance shows whatever stage you’re at.”

The season also brought back memories for Billy Porter of becoming an AIDS activist after his first gay pride parade in New York City in 1989. He was in a production of “Joseph and the Technicolor Dreamcoat” in New Jersey when some of the cast invited him to meet them at 11 a.m. at St. Patrick’s Cathedral. “I got there at 11:15 They were already marching,” Porter recalled. “My friend saw me. He threw a t-shirt over my head that said, ‘Silence equals death,’ pulled me into the march, and we were chanting, ‘Act up. Fight back. Fight AIDS.’ That’s how it started for me.”

Production on season 3 of the FX series was halted earlier this year due to the coronavirus pandemic. “I’m looking forward to us being able to go back into production on this third season for more laughter, more tears, more shade and more of our personal politics being up front and center,” said series co-creator Steven Canals. “Addressing the importance of not only having resources, both monetary, medical, housing, and otherwise, for Black and Brown people in our country. Also addressing the fact that, again, the government needs to do more to protect Black bodies.”

Season two of “Pose” is now available on Netflix.