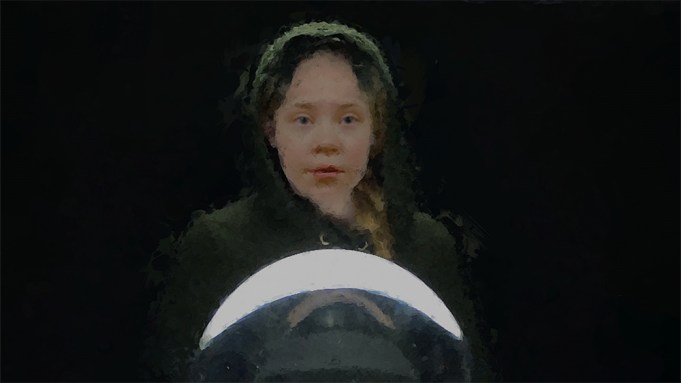 Throughout the video, Thunberg observes giant waves overwhelming such world landmarks as London Bridge, the skyscrapers of Manhattan and even the Space Needle of Pearl Jam’s Seattle hometown. But just as “Retrograde” the song strikes a balance between despair (references to “seven seas rising forever” and a “future fading out”) and determination (“It’s going to take much more than ordinary love to lift us up”), the clip aims to “imagine the future and then try to alter it,” according to Wakely.

“Something Pearl Jam has done so extraordinarily well for 30 years is to speak truth to power and fire warning shots,” he says of “Retrograde,” penned by Pearl Jam guitarist Mike McCready. “Several other [“Gigaton”] songs spoke to me, but this one kept me up at night.” Wakely was hard at work on another project when he was contacted in mid-March by Pearl Jam manager Kelly Curtis to conceptualize the video. Three days later, the world shut down amid COVID-19 and what normally would have been produced as a live-action shoot became a mix of animation and motion capture, all assembled remotely by a team in far-flung corners of the globe.

“Several times, I wondered if I’d have to call the band and tell them I couldn’t do it,” Wakely admits. “I would walk into my basement studio at 8 a.m. and leave at 2 a.m., with Zoom running pretty much the entire time. But it was an amazing team effort. And it remains pretty definitively the vision i set out in the script long before COVID was a word I understood.”

Wakely says Thunberg was “the only person” he could envision in the fortune teller role, describing the 17-year-old Swedish native as “an absolute stone cold hero” for her unflinching climate change activism. With her permission, Wakely utilized a variety of existing footage of Thunberg which was then grafted onto the body of another actress to generate the finished product. “She never had to act a frame, but she provided that emotion I was looking for. It was a huge thrill to see an email in my inbox from her saying that she loved it,” he says.

In the same vein, the customer who braves a downpour to find his way in to see the fortune teller was initially to be played by a professional actor. But without the ability to film on a set, Wakely turned to “Avengers” and “Captain America” cinematographer Trent Opaloch to portray the character instead. “He was stuck in his house in the middle of Canada, so it wound up literally being me directing Trent as he set up the camera and placed himself in the shot,” he says. “It was a really interesting and sobering and in some ways energizing time to be creating art like this.”

Elsewhere, the members of Pearl Jam appear as characters on tarot cards in a scene which pulls back to reveal a deck of seemingly infinite size. “That speaks to the determination and the collective talent of the animators, who were filming themselves,” Wakely says. “This video has hundreds of people who are visually shown on screen and not one of them met the other one during the making. I think there’s 140 tarot cards with 140 different real people. I have yet to meet any of them.”

And in a nod to the hardcore Pearl Jam fan, the fortune teller’s storefront is revealed to be in a strip mall emblazoned with references to the band’s prior releases such as “Ten,” “No Code” and “Lightning Bolt.” Says Wakely: “I wanted to give a little subtle nod that they’ve been making great albums for a long time. I certainly would have preferred to sit with the Pearl Jam guys and have a beer while talking about how to make this video, and logistically, this was the most complicated project of my entire life. But in the end, it was easy. My job was just to serve this incredible music.”

Wakely is now returning his focus to “Time Out of Mind,” which, as Variety first reported in March, finds him teamed with former NBC president Warren Littlefield to produce a drama series reimagining characters from the songs of Bob Dylan. Dylan himself is serving as an executive producer.

“It features all the iconic characters from Dylan’s mind, colliding and clashing in 1960s Greenwich Village,” Wakely says of the series, a distribution deal for which has yet to be announced. “I had three episodes written when the pandemic began and I have six now. With iconic material like Dylan’s, there’s a timelessness and an urgency. And that’s the kind of stuff I want to be working on right now.”