Randy Newman, Cynthia Erivo, Diane Warren and the husband-wife team behind "Frozen" are among the other best original song nominees. 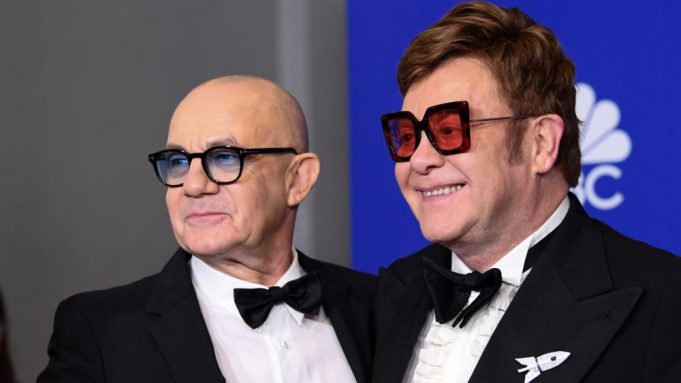 Elton John could take home his second Oscar and longtime writing partner Bernie Taupin his first, as their song “(I’m Gonna) Love Me Again” from “Rocketman” was among the best song nominees at Monday’s Oscar nomination announcements.

The two have already taken home the Golden Globe for their closing song in the John biopic, their first award together in 52 years of songwriting collaboration. John won a 1994 Oscar for “Can You Feel the Love Tonight” from the original Disney animated film “The Lion King.”

Four of the five songs are by writers who have been to the Oscars before. Up twice this year, Randy Newman earned his 21st and 22nd nominations for “I Can’t Let You Throw Yourself Away” from “Toy Story 4” as well as the original score from “Marriage Story.” He has already won two Oscars, both from Pixar films (“Monsters Inc.” and “Toy Story 3”).

Robert Lopez and Kristen Anderson-Lopez return to the Oscar competition with “Into the Unknown,” the big tune from “Frozen II.” They are also two-time winners, and also for Disney films in both cases: “Let It Go” in the first “Frozen” movie and “Remember Me” from “Coco.”

Veteran songwriter Diane Warren earned her 11th nomination for “I’m Standing With You,” from “Breakthrough.” This is her fifth nod in the past six years and she has still not won.

The newcomers in this category are Cynthia Erivo and Joshuah Brian Campbell for “Stand Up,” the end-title song from the Harriet Tubman biopic “Harriet.” Erivo, who is also nominated as best actress for the role, co-wrote and sang the song.

Overlooked in the final voting the 345 music-branch members were such superstars as Beyoncé, who contributed a new song to Disney’s remake of “The Lion King”; Pharrell Williams, who wrote one for the documentary “The Black Godfather”; Thom Yorke of Radiohead, for a song in “Motherless Brooklyn”; and Mary Steenburgen, whose song from the country-flavored “Wild Rose” was considered a last-minute contender.

The best original song category often rewards tunes from films that get no other nominations. That was the case for three out of five nominees this year, as “Rocketman” failed to secure a nom for Globe acting winner Taron Egerton, or anyone else who worked on the film, and “Frozen II” was, surprisingly, frozen out of the animated feature category. The faith-based film “Breakthrough” also got its only nod via the recognition for Warren.