Mariah Carey’s ‘All I Want for Christmas’ Is Back as the Country’s No. 1 Song… and Brenda Lee Has the Silver Medal 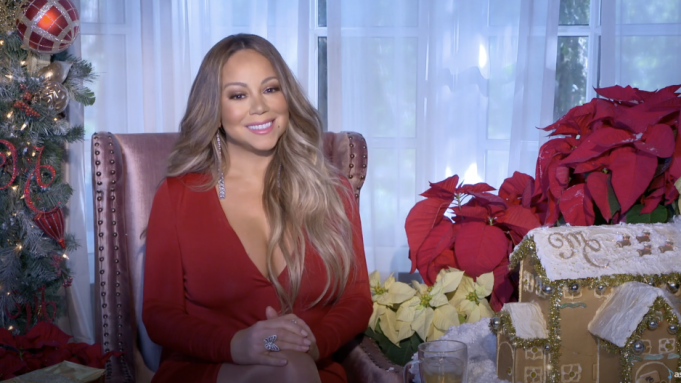 With holiday songs engineering a near-complete takeover of the pop charts, even with weeks to go before Christmas, it’s clear that America has turned its musical attention to wet-ass snowflakes.

It wasn’t a matter of whether it would happen, only how soon, when it comes to the oldie that finally took the top spot last December repeating the feat this year. Mariah Carey’s “All I Want for Christmas Is You” has already risen to the top spot on the national singles chart, zipping past the non-seasonal competition. Its ascendancy took place in a week beginning on Black Friday and ending Dec. 3, meaning there’s a very likely chance the indomitable chestnut will enjoy a four- or even five-week run at the top.

Carey’s song jumped to the top of the Rolling Stone songs chart from its No. 7 position last week, with a total of 183,600 song units, powered by 22.3 million song streams on top of substantial radio play at thousands of already-flipped stations.

A 26-year-old song leaping to No. 1 is no longer surprising, after last year’s “All I Want for Christmas Is You” crowning. What may be more surprising is a 62-year-old single bounding to No. 2. Brenda Lee’s “Rockin’ Around the Christmas Tree” at least came within sight of the title, accumulating 157,200 songs units and being streamed 18.9 million times.

Even at this early stage in the Christmas game, there are only three non-holiday songs that haven’t been squeezed out of the top 10: “Dakiti” by Jhay Cortez & Bad Bunny at No. 4, “Body” by Megan Thee Stallion at No. 6 and “Mood” by 24kgoldn featuring Iann Dior at No. 8.

As for other Christmas songs hogging the chart, the remainder of the top 10 slots were taken over by the likes of Bobby Helms’ “Jingle Bell Rock” at No. 3 (pretty close behind Brenda Lee, with 18 million streams), Andy Williams’ “It’s the Most Wonderful Time of the Year” at No. 5, Dean Martin’s “Let It Snow, Let It Snow, Let It Snow” at No. 7, José Feliciano’s “Feliz Navidad” at No. 9 and the Ronettes’ “Sleigh Ride” at No. 10.

Expanding the field, star carolers making it into the Nos. 11-20 spots include Wham!, Darlene Love (profiled this week by Variety), Bing Crosby and Perry Como.

Christmas tunes represented 27 of the top 40 most popular songs, a number that may only grow as the actual holidays grow closer. Over on the Rolling Stone album chart, 16 of the top 50 albums this week were seasonal collections, led by Michael Buble’s resurgent album.

To see all 100 tracks on the Rolling Stone songs chart, click here.