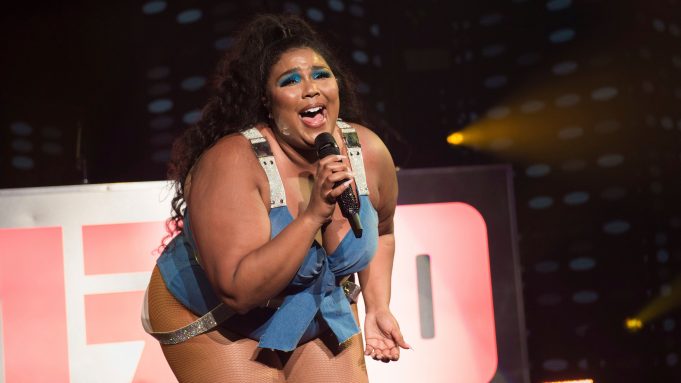 Lizzo has been making the rounds this month, performing several times during Grammy Week — and of course opening the big show itself. Last night, she brought the party to a headlining Super Bowl Week concert at the Miami Beach Fillmore at the Jackie Gleason Theater, rocking the crowd with a 90-minute performance of her greatest hits that saw her joined for the finale by Harry Styles.

“I just want to say that this is my first show since the Grammys, so I feel that I have not quite processed [all of this]!” said the singer, who brought home three awards on Sunday night (for Pop Solo Performance, Urban Contemporary Album and Traditional R&B Performance). The invite-only concert, hosted by SiriusXM and Pandora, was part of their Super Bowl Opening Drive Super Concert Series, which also included a performance by The Chainsmokers on Wednesday evening.

“I’m so blessed to be here for the Super Bowl. This is really cool,” she said. She told a story about watching Janet Jackson’s performance during Super Bowl halftime at home in 2004 and saying how excited she was for it (without mentioning the controversial “wardrobe malfunction”). “Now Janet Jackson likes my songs,” she concluded, to cheers.

For the entire show, which included hits like “Cuz I Love You” and “Jerome,” Lizzo delivered empowering quotes and affirmations from the stage.

Still, the evening’s most moving moment was a bittersweet one. Lizzo took a minute to remember Kobe Bryant and the other victims of Sunday’s helicopter accident and their families. With a bedazzled tequila bottle at hand, she raised a toast to Bryant and all involved in the tragedy.

“I can’t be at the Super Bowl and not acknowledge the loss of Kobe Bryant and his daughter Gianna,” she said. “I didn’t know him, and you guys probably didn’t know him either, but you felt it. That’s because we are all connected. We have an effect on each other. We don’t know what tomorrow holds,” she said, and then dedicated “Good as Hell” to Bryant and his daughter. As the performance ended, she held back tears and shouted “We love you Kobe!”

Last night, @lizzobeeating sang “Good as Hell” with a touching tribute to the Bryant family. Other highlights: her SMASH hit “Truth Hurts” while ending the show with special guest @harrystyles joining her for “Juice!” Empowerment, self love and affirmations were all part of the performance at @fillmoremb ⚡️💘 #Lizzo #HarryStyles #SuperbowlLIV

After one more drink, she put on her trademark white veil and plunged into “Truth Hurts.”

For the grand finale, the house erupted when Lizzo welcomed Harry Styles to the stage. Together they performed “Juice” in a lively duet filled with synchronized dancing.

Styles is performing in Miami tonight — will there be a repeat duet?