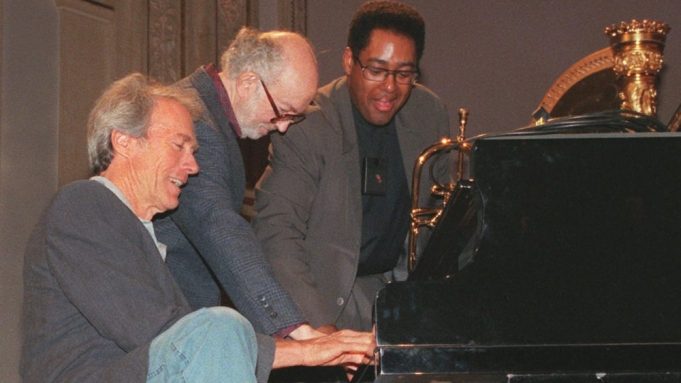 Lennie Niehaus, who went from Stan Kenton sideman to Clint Eastwood’s movie composer during a nearly 60-year career in music, died Thursday at his daughter’s home in Redlands, Calif. He was 90.

Niehaus’s two dozen films for Eastwood include original scores for the best picture-winning Western “Unforgiven,” the Charlie Parker biopic “Bird” and the popular romantic drama “The Bridges of Madison County.”

The two met in 1953 at California’s Fort Ord, when the two were in the Army during the Korean Conflict. “I used to play jazz jobs at one of the beer clubs on the base, and Clint was tending bar,” Niehaus wrote in an essay about the actor-director for his 1996 American Film Institute Life Achievement Award. “I used to go off post and play in a little jazz club in nearby Santa Cruz on Sunday afternoons, and he would be there.”

Niehaus’s Army service interrupted a long stint playing alto saxophone, and later arranging, for renowned bandleader Stan Kenton. He joined the Kenton band in 1951 and then rejoined it in 1954. Beginning in 1958, he wrote arrangements for such Kenton LPs as “The Stage Door Swings,” “Sophisticated Approach” and “Adventures in Standards.” He once estimated that he wrote 100 arrangements for Kenton’s dance band.

He also recorded six albums with his own combo, showcasing a more modern jazz style, for the Contemporary and EmArcy labels in the 1950s. The New York Times once referred to Niehaus’s own music as “linear and at times fleetingly dissonant, literate and swinging.”

In the late 1950s, he met composer and bandleader Jerry Fielding and began writing orchestrations for him — initially for singers in Las Vegas, where Fielding had been exiled during the Hollywood blacklist period, then later for TV series including “Hogan’s Heroes” and “McMillan and Wife.”

Niehaus orchestrated such 1970s Fielding scores as “Lawman,” “Straw Dogs,” “The Mechanic” and “The Gambler,” along with four from the period when Fielding was regularly composing for Eastwood: “The Outlaw Josey Wales,” “The Enforcer,” “The Gauntlet” and “Escape From Alcatraz.”

A few years after Fielding’s 1980 death, Niehaus began working for Eastwood as composer himself, first on 1984’s “Tightrope” with its New Orleans setting, then on the Western “Pale Rider” and the military drama “Heartbreak Ridge.”

As the piano-playing Eastwood’s confidence in his own music grew, he began writing themes that Niehaus incorporated into his films — “Claudia’s Theme” in the 1992 “Unforgiven” and “Doe Eyes” for the 1995 “Bridges of Madison County” among them. By 2003, Eastwood was composing full scores (notably for “Mystic River” and “Million Dollar Baby”) but having Niehaus orchestrate and conduct them. That practice continued through 2008’s “Gran Torino.”

Niehaus scored several television projects, including Eastwood’s “Vanessa in the Garden” for Steven Spielberg’s “Amazing Stories”; six installments of Shelley Duvall’s “Faerie Tale Theatre”; the two-part 1996 miniseries “Titanic”; and the “Lonesome Dove” prequel “Comanche Moon.” He won a 1994 Emmy for the Showtime jazz movie “Lush Life” and earned a 2008 Emmy nomination for one of his last projects, “Mitch Albom’s For One More Day.”

Niehaus was born in 1929 in St. Louis, Mo., the son of a Russian-born violinist who played in silent-movie houses. He began writing big-band arrangements in high school. He attended Los Angeles City College and Los Angeles State College, majoring in composition (while playing jazz in an off-campus band).