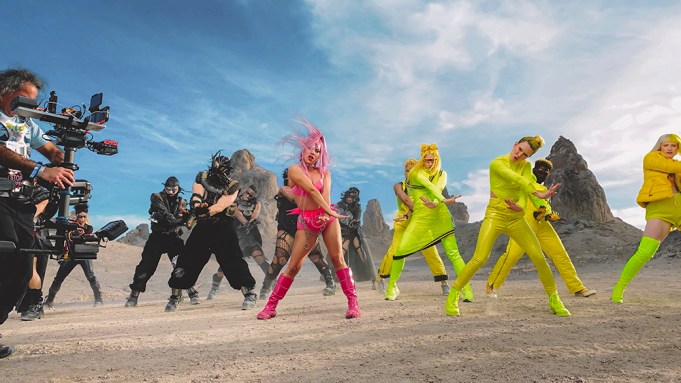 “When the video first came to me, it was in the form of a voicemail from Gaga,” director Daniel Askill recalls of the clip for the Oscar-winning singer’s new single, “Stupid Love.” “She spoke about these seven warring tribes as a metaphor for the state of the world today — that’s what hooked me. She was interested in trying to bring across this message of peace and coming together and putting our differences aside.”

And, of course, dancing.

You can always count on Lady Gaga to do something bold, original and unexpected, and her return to pop music was no exception. In this case, it wasn’t the fact that her video was shot entirely on a iPhone 11 Pro — Selena Gomez already did that with her video for “Lose You to Love Me” — but rather further erasing the line between iPhone advertisement and music video. Or, more specifically, art and commerce.

“Obviously, this is so smart on behalf of both Gaga and Apple to just lean into the blurring of that line — and just focus on creating a great piece of content that can bridge the gap between the two,” says Askill, who has directed videos for such artists as Sia, as well as ads for Apple. “What was amazing is that no one was telling everyone what to do — like sometimes happens when you’re doing commercials.”

“I’ve been lucky to do projects for Apple in the past but never one that’s been fully shot on an iPhone, so this was a new experience for me,” says the director. Admittedly, he adds, the process required “a learning curve and experimentation to work out how we could push what was possible on these phones and bring them into a professional film environment.”

Askill attached three phones to a steady cam (one shot 24 frames in real time, the second 48 frames for a slo-mo version and a third served as an extended pair of eyes), another pair on drones whirling overhead and a couple were manually operated by him and the DP for handheld action. “Because of their size, we could have a lot of different things going on at once,” he says.

Similarly, because of the company’s size, Apple allowed Gaga’s album campaign to have unprecedented exposure on their platforms. “To be able to work with Apple and their power and their reach? To me, we’re very lucky a company like Apple is willing,” says Steve Berman, vice chairman of Interscope Geffen A&M (IGA). “When you wake up and you see Lady Gaga on the cover of apple.com, that is as good a feeling as you get.”

Of course, Apple has a long history of uniting music and visuals, one of the earliest examples being Interscope’s own U2, whose “Vertigo,” used in a 2004 commercial for the iPod, was nothing short of an advertising sensation. Feist followed in 2007 when the quirky singer-songwriter approved “1, 2, 3, 4” for an iPod Nano spot and sales of the bop exploded. So it was no surprise to see the likes of Taylor Swift and Drake pop up in 2016 ads for Apple Music. More recently, the MacBook Air helped launch the song “Trampoline” by Shaed, 2019’s most played song on the alternative format.

Technology has changed “so dramatically,” adds Berman. “More and more it’s about how you capitalize on opportunities for artists to be able to execute their vision. And we feel very fortunate to have it amplified by all the places that Apple touches with their media. Our job is to reach as many people as we possibly can, and Apple is the partner you dream of to be able to do that.”

“Stupid Love” was written in collaboration with BloodPop, Max Martin, Tchami, Martin Joseph and Eli Rise. It’s the first single from new album “Chromatica,” which is scheduled for release on April 10.