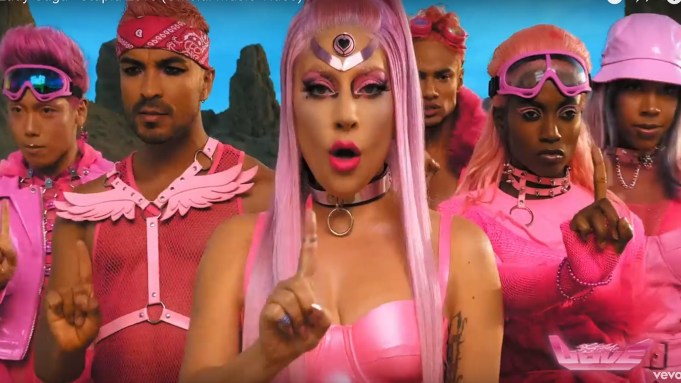 Lady Gaga is back in a big way with her new single “Stupid Love,” which, on the basis of a few listens is arguably her best song since “Edge of Glory” — a collaboration between her, hitmakers BloodPop, Max Martin, Tchami, Martin Joseph and Eli Rise — and it’s got a suitably eye-popping video to go with it that was directed by Daniel Askill and apparently shot entirely on an iPhone 11 Pro.

While the song’s lyrics are of a fairly straightforward Gaga-love-and-positivity nature, the video seems to derive its theme from one line — “Could this love protect me from the pain? / I would battle for you, even if I break in two.” In the clip, Gaga and her dancers rock and gyrate through a futuristic, “Mad Max”-type alien desert landscape in a wide variety of day-glo outfits.

An introducing slate points to what many speculate is the album’s title: “Chromatica,” which in this context seems to be a character like the “Enigma” featured in her Las Vegas residency.

“The world rots in conflict,” the slate reads. “Many tribes for dominance. While the Spiritual ones pray and sleep for peace, the Kindness punks fight for Chromatica.” The word also appeared in the artwork advertising the single earlier this week.

Emotionally, Gaga swings from elation to sadness during the video, and later breaks up a fight between two of the dancers by — naturally — levitating them.

Kindness punks, Chromatica, alien worlds — we’re not sure what all this adds up to, but it’s great to hear Gaga back at what she does best: An exciting, pulsating dance song with an irresistible beat and great hooks.

“Stupid Love” is her first new non-“Star Is Born” single since 2017’s stand-alone “The Cure” — and while there’s no further official info yet, it’s a promising sign for her next album, probably called “Chromatica,” and probably coming in the next few weeks.