Watch Lady Gaga Lead Star-Studded ‘The Prayer’ with Celine Dion, John Legend and Andrea Bocelli for ‘Together at Home’ 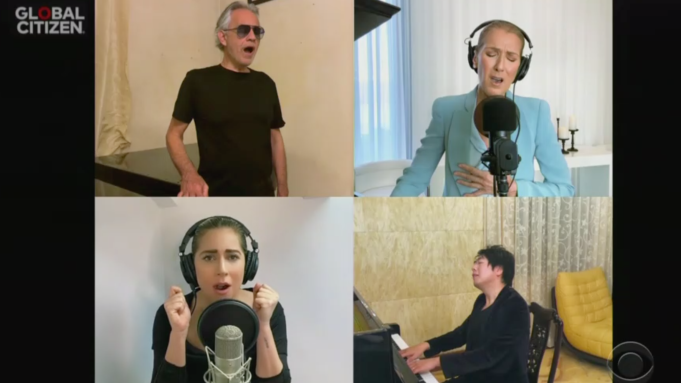 Lady Gaga, John Legend, Celine Dion and Andrea Bocelli brought “One World: Together at Home” to a close with soaring four-part harmony — and accompaniment by piano virtuoso Lang Lang — with “The Prayer,” the song that became an inspirational standard after Dion and Bocelli recorded it separately and together 21 years ago.

It was the sole appearance on the two-hour prime-time telecast by Bocelli, who might actually count as the biggest pop star of the week, after his Easter Sunday live-stream from Milan was viewed by more than 30 million people on YouTube. For Lady Gaga, who received credit for curating the special, it was a bookend to the number she began it with a little less than two hours earlier, a solo piano rendition of Charles Chaplin’s “Smile.” Legend had also appeared earlier in the telecast, in a duet with Sam Smith.

As with the other joint appearances on the show, the bravura performances appeared to have been recorded separately and built on one another, with well-matched vocal tone despite the different home “studio” settings and seamless editing.

The song was originally recorded by Dion in English and Bocelli in Italian for the soundtrack of the 1998 animated film “Quest for Camelot.” Dion and Bocelli also did a duet version that appeared on their respective solo albums in 1999. “The Prayer” earned songwriters David Foster, Carole Bayer Sager, Alberto Testa and Tony Renis an Oscar nomination for best song in ’99, and it won the Golden Globe in that category. (Dion subsequently released another duet version with Josh Groban.)

“The Prayer” was the climax of not just a two-hour prime telecast shared by major networks but eight hours of music in all, as Global Citizen previewed the star-studded main broadcast with a six-hour streaming show on digital platforms that included dozens more performances.

A song with that much vocal and celebrity firepower was obviously going to be reserved for the climax of the long day of music. It was immediately preceded by the evening’s biggest solo star, Taylor Swift, who sang an equally emotional but less upbeat ballad, the cancer-themed “Soon You’ll Get Better.”

Songs of uplift filled much of the two hours, whether it was Keith Urban covering Steve Winwod’s “Higher Love” or Legend and Smith singing Ben E. King’s “Stand by Me.” Billie Eilish and Finneas revived a ’60s classic that gets fewer revivals now, “Sunny.” But the Rolling Stones had split-screen fun with the more practical message of “You Can’t Always Get What You Want.”