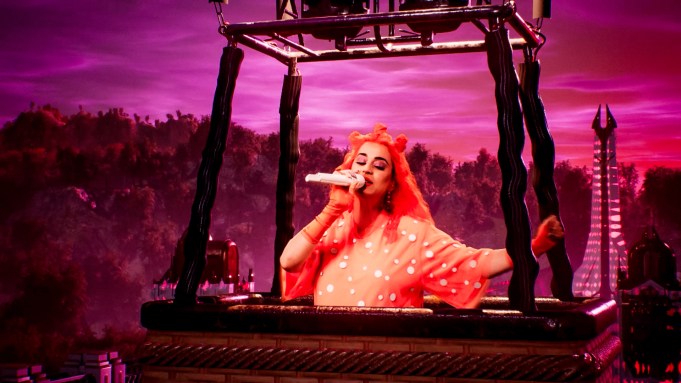 Katy Perry has delayed one due date — that of her new album, “Smile,” which just got bumped back two weeks, to August 28 — but another imminent one won’t wait. And so Perry declared that her last set before becoming a mother would be the performance she gave over the weekend as part of the virtual Tomorrowland Festival.

On July 25 and 26, Perry popped in at the live-streaming dance festival, backed by its virtual set and audience. She kicked off the performance with a new song from “Smile,” her sixth studio album, and had her band dressed in comical clown hats, matching the circus theme of the forthcoming album. (Watch, above.)

“Hello Tomorrowland! I’m Katy Perry, and I hope you can smile with me tonight,” she called out to her fans watching from home.

Perry put an EDM spin on some of her popular tracks — “Teenage Dream,” “California Gurls,” “Dark Horse” and “Roar” — and shared her “Daisies (Can’t Cancel Pride)” remix, accompanied by a giant daisy dancing on stage. She closed her set with “Firework,” with virtual balloons and fireworks filling the sky.

At last Wednesday’s Tomorrowland press conference, Perry promised attendees that the festival will be nothing like other virtual events they’ve attended during quarantine.

“I just thought it was so innovative and so resilient of a festival to just say, you know what, f— it, we’re just going to pivot and we’re going to bring something really technically advanced and difficult, but we’re going to create something beautiful out of this mess,” she said. “All I will say is that the performances are not on Zoom and not on our couches. They are (at) a high level, and they’re going to be different than anything you’ve tuned into during quarantine.”

The Tomorrowland Festival, which usually takes place in Boom, Belgium, was recreated this year on a virtual platform, for what organizers dubbed Tomorrowland Around the World. The EDM fest, featuring eight stages and over 60 artists including Perry, Adam Beyer, Afrojack, ANNA, David Guetta, Gryffin, Martin Garrix, San Holo, Steve Aoki and Tiësto, was reported to have garnered over a million viewers from around the world.