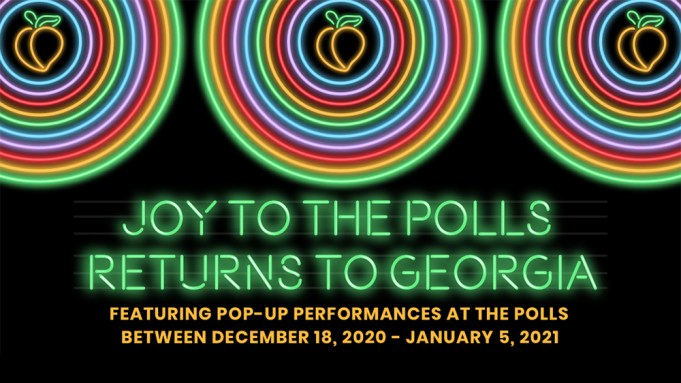 Artists Royce da 5’9”, Busta Rhymes, Jon Batiste and Funkmaster Flex are among the names of performers who have participated in roving pop-up shows in front of polling centers around the country as part of nonpartisan pop-up concert series Joy to the Polls.

Rick Ross, Moneybagg Yo, Kap G, DJ Infamous and a host of other popular musicians and DJs will also participate in the free concert series to spread entertainment and cheer to voters standing in line across Georgia in the runup to the Senate runoff election. Joy to the Polls will kick off Dec. 18 in front of an undisclosed Atlanta polling center and will conclude on Election Day Jan. 5.

“Talented artists and musicians will be popping up all over Georgia to bring Joy to the Polls during the state’s run-off election for US Senate,” said Nelini Stamp, campaign director for Election Defenders and creator of Joy to the Polls. “In the face of a global pandemic, and other challenges designed to suppress the vote, the people are fighting back with joy. Together, we will continue to make voting more accessible and a celebration for all.”

The runoff election edition of Joy to the Polls follows its Election Day success in November when it brought hundreds of artists to polling centers across the country, including Offset, Vic Mensa, Ace Hood and others.

Joy to the Polls is an initiative of the Frontline Election Defenders, a nonpartisan movement aiming to make voting a positive experience, if not an all-out celebration. Election Defenders has trained thousands of volunteers nationwide to provide safe support for voting, such as PPE and water, election and voter defense, de-escalating white supremacist intimidation tactics and signaling to a network of groups and lawyers if trouble breaks out.