Jojo Siwa and Jojo Interview Each Other About Bullying, Life in the Spotlight and Googling Yourself 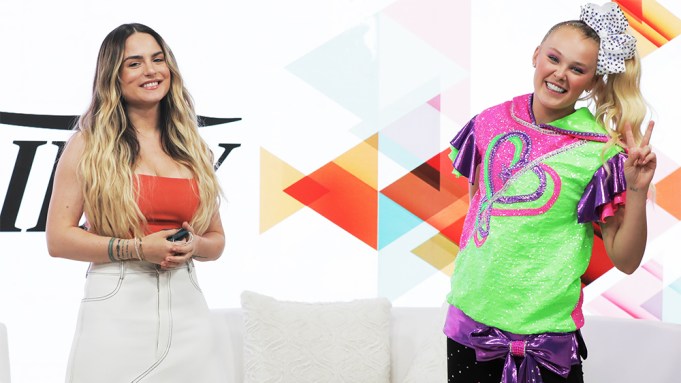 Call it a match made in internet heaven. Some six years after JoJo Siwa, 17, first started tinkering with music on her computer and happened upon her pop predecessor JoJo, who, at age 13, had a No. 1 hit with the 2004 song “Leave (Get Out),” the two met IRL at the Variety offices — with social distancing protocols in place — to interview each other.

As they learned soon into their conversation, the two have much more in common beyond their name — although that in itself is uncanny: JoJo Siwa’s is an abbreviation of Joelle Joanie and JoJo’s full name is Joanna Noëlle Levesque. (Cue the “Twilight Zone” music.)

On the agenda: the trials (literally in the case of elder JoJo, now 29, who was stuck in record label limbo for a decade and eventually had to re-record her catalog to make it available to stream), tribulations and triumphs of being a teen star, which, for Siwa, includes a social media following nearing 25 million, a billion-dollar merch empire, world tours and many, many bows.

See below for highlights from the talk and watch the video above for the whole interview.

What’s in a Name

First Awareness of the Other JoJo

JS: I remember somebody tweeted something, like, “I bought my wife tickets for a JoJo concert, only to find out it’s a JoJo Siwa concert. And we have to go and there’s going to be nine-year-old screaming little girls, but whatever, we’re going to make the most of it.” You liked that tweet and it was the first time we interacted.

JoJo Levesque: I became super-aware when people would show up to my concerts wearing a bow, and be in for a very wild surprise when they realized that they got me and not the colorful, sweet JoJo Siwa. I’m nice but a little wild.

JS: I Google myself all the time.
JL: Do you?
JS: Oh yeah. I like to know what’s going on. I gotta find out who JoJo Siwa’s boyfriend is; why JoJo Siwa dyed her hair. I read all the articles.
JL: Good for you. You must be really strong to be able to do that.

JS: I started when I was nine, being in the public eye, and so I can finally be like, “That’s half my life.”
JL: I know exactly what you mean. I remember when I reached that point too. But you already have done your 10,000 hours before the age of 18. That’s so incredible.
JS: Is that what they say, is that you should work your life, 10,000 hours?
JL: They say that you become an expert or a master at your craft at 10,000 hours.
JS: Oh yeah, I’ve definitely put that in.

JL: Does your mom have a background in the music industry? How did you guys get into it?
JS: No. When I was little, I wanted this so bad. I wanted to either be a pop-star or a surgeon.
JL: I wanted to be a pop-star or a veterinarian.
JS: But people will say, “Oh, my kid has it,” or “My kid wants it,” or “My kid wants to be famous.” But it was different. I really did. Everyone who met me was, like, “You just need to walk her into Disney Channel and just be like look at this kid.” And we were like, “Okay, well clearly that’s not how it works.
JL: My mom managed me for the first 12 years of my career, from five to 17, and it was good, and then it wasn’t good. She hated the industry so much. She just saw people trying to come in and take advantage and split us apart, and get in her ear. She is such a pure soul that it was not right for her. If you don’t have the thick skin to deal with that…
JS: It’s not worth it.

JL: My first single was so grown. I was singing about things that were way older than what I should have been singing about, so I kind of caught up to my subject matter. Do you envision your music evolving as you evolve?
JS: Yeah, I do. But for me, it’s actually the opposite. I don’t want to sing about something yet [if I’m] not ready to.
JL: That makes me so happy. I never got the sense that you were doing something you didn’t want to do. I love that you’re not in a hurry to grow up, or to assume those adult responsibilities, or whatever. You already have your responsibilities on you, but there really is no rush. When we first met you were like, “I love being 17. It’s my favorite age I’ve been.”
JS: It only gets better.

Fears You Had to Get Over

JS: Teenagers. After I was the top meme in October, with people criticizing my hairline and saying I’m a giant toddler, I went to Knott’s Scary Farm, and people were being awful. All these teenagers were, like, “JoJo Siwa, F– you! Go home.” All night long people were shouting things at me. So I just thought teenagers don’t like me. And I am one! But I didn’t have any teenage friends, and I do now.

… And singing live. I always thought I was a bad singer which made being on “The Masked Singer” not always comfortable. Going back into tour rehearsals after the show, I was, like, “Is it a good idea for me to sing live?” It put me right back into that, but luckily I got out of it very fast.

JS: I was, like, “I can do that. Give me 10 minutes.” I went and watched a scene from “Grey’s Anatomy” — Derek dying, “How to Save a Life,” let’s go! And U came out sobbing. The director, acting and dialog coach were all coming up to me giving me these big hugs. What was it like working with Robin Williams on the movie “RV?”
JL: To see the way that he conducted himself on set is something that will stay with me for the rest of my life. Because he would be the first person to get there, the last to leave. He’d always have ideas. He was so present, and he knew everybody’s name. He cared. It was nice that I got to see a legend be like that, as opposed to being a diva.

JL: My tour was pushed back to summer of next year. And it’s just interesting, because I already cashed those checks in my mind, you know? I don’t have a bow business like you do. Touring is so, so important. But this has given me the opportunity to follow my other creative passions. I’ve become so passionate about plant-based cooking and baking. … I love things that engage my senses. So whether that’s smells, fabrics, sounds, any of that.

JS: I decided that when I’m older I want to open up a dance agency and make a home for dancers.
JL: In 10 years. I also want be a part of younger artists careers. I want to build the label that I have, Clover Music, in partnership with Warner Records, sign acts, help develop them, and continue to build my career and expand. And I still want to be on the road touring as well. I love it.

Watch The Full Power of Young Hollywood Special Below: