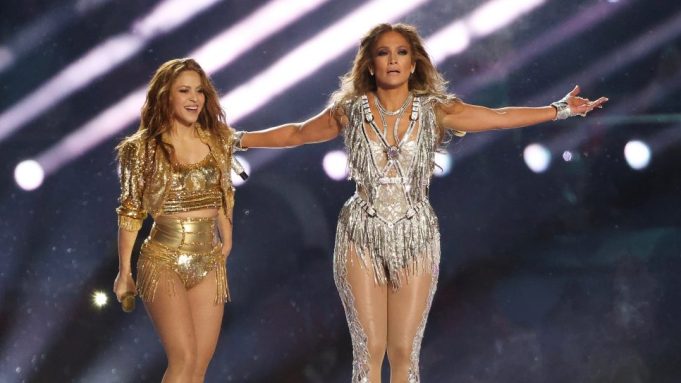 Oscar nomination, schmoscar nomination. There’s no Academy for this, but Jennifer Lopez, in tandem with Shakira, earned some kind of unofficial award Sunday night for managing to pull off something no other performer has in years: convince a wide plurality of America it made the right collective choice not to click over to the Puppy Bowl.

In 14 minutes of pure frenzy, the duo and their guest stars, J Balvin and Bad Bunny, celebrated Latin music on the Super Bowl’s world stage while also giving the Fox nation the old-fashioned American show-biz virtues of choreography, choreography and more choreography. Hooray for Colombia, Puerto Rico and Hollywood — take your pick, or take ‘em all.

In a possible nod to “Hustlers,” or maybe just a fulfillment of the laws of inevitability, there was pole dancing… classy pole dancing. (Yes, that can be a thing.) Not to leave raciness out of the equation entirely, there was also a wholesome variation on dirty dancing. (Tweeted Perez Hilton: “I haven’t had sex since 2016, but this was close.”) Bodies were thrown in the air and tossed between stages before coming back together in fiercely rehearsed lockstep. Ponytails were put into mass rotation. Superstar drums were played. Hips were made to tell the truth… as they must. If you don’t hate spectacle, whiplash, multiculturalism or lessons in the importance of doing squats, it was a triumph.

Granted, the bar got reset pretty low with last year’s halftime non-extravaganza, not because Maroon 5 wasn’t good at being Maroon 5, but because a show that relies on Adam Levine doffing his shirt for its abs-and-tats climax has just been mis-booked. This year, the Super Bowl talent duties were assigned to Jay-Z’s Roc Nation. And while the NFL might have been wondering if it made the right choice when its halftime co-producer and his superstar wife declined to stand for Demi Lovato’s expert reading of the National Anthem (a newsmaking sit-out that threatened to overshadow anything Roc Nation had spent months putting together), there can be few regrets on the league’s part about what transpired out on the field.

A surprise version of Cardi B’s “I Like It” had Shakira taking over the lead part before being joined by the song’s familiar Bad Bunny. That might have been helpful for anyone who’s not hep to the Latin music charts, where all of Shakira’s hits have landed in recent years, even as J.Lo has been mostly absent from any kind of chart. That there were fewer recent English-language Top 40 hits here than in any other recent halftime show surely wasn’t a terrible hindrance to even the non-Spanish-speaking part of the audience — which did have familiar oldies “Jenny from the Block” and “Hips Don’t Lie” to rely on — in a performance where hoofing was paramount and (mostly) lip-synched hooks secondary. It’d be a stretch to think that having that much espanol in the highest-rated TV show of the year was intended as a political statement, as opposed to just doing what they do. But you can’t rule out that it’ll be taken that way anyway, by many approving viewers, and possibly a few less so.

Although J.Lo got more of the early publicity, the show couldn’t have been more evenly split if it’d been contractually mandated. (Which maybe it was, if you looked at the clock and saw that the transition from Shakira as headliner to J.Lo came exactly midway into the 14-minute performance, almost down to the split-second.) This was not a case of too many cooks creating not much broth at all, as has been the case with so many halftime performances, where artists have seemed thrown together for no reason, from the Aerosmith/NSYNC pairing in 2001 to Coldplay, Beyoncé and Bruno in 2016 to the hip-hop interlocutions during Maroon 5’s “please don’t hate us for being white” set last year.

You could celebrate the fact it was two Latino acts sharing the most highly viewed stage the globe has to offer, or that it was two women, or that it was two women over 40 — or that it was two performers who’ve put in their 10,000 hours, and then some, to shake it that expertly and effortlessly. Looking back on a review of last year’s show, we used the phrase “oddly denuded of joy,” but there was joy to spare in this one, in the glee that Lopez and especially the always-grinning Shakira exuded, even before all that caped flag-waving at the end — half U.S. flag, half Puerto Rican — offered additional reasons for multi-culti exuberance.

Costumers deserve almost as much credit as the choreographers here. Why, exactly, was the bespectacled Bad Bunny clad in a silver trench coat and hood that made him look like the robot Gort from “The Day the Earth Stood Still”? Well, why not? That was the most unusual costuming choice in a sea of outfits that first balanced red-and-leg, then black-and-leg… although attention must be paid to Lopez finally stripping down to a bodysuit that made her appear to be half-naked and half-clad in shards of glass. For a finale that accentuated rear movement, of course, There Would Be Fringe, and it would pay off.

The appearance of Lopez’s 11-year-old daughter, Emme, was sweet — and the closest thing to a breather in these 14 minutes of hysteria — although the snippet of “Born in the USA” that appeared as a segue into the finale felt slightly odd, even if its reason for being as an introduction to the flag costuming was apparent. In a blink-and-you-missed-it statement, Emme and the other children emerged from what looked like glowing bird cages before singing “Let’s Get Loud.” Was this production design coincidence, or an act of sneaking pro-immigration political commentary onto a network that doesn’t exactly favor it? On a show this planned out to the tee, accidents probably don’t happen.

The show would have been just fine as a pure entertainment without the blending of cultures being brought to the foreground instead of as obvious subtext. But amid the bounty of bootymania, there was something almost touching about the intersectionality of the Americas getting more than lip service at the end. These two gave it hip service, and for as long as they were on stage, no one with the slightest love of movement or rhythm could take a knee, or a seat.