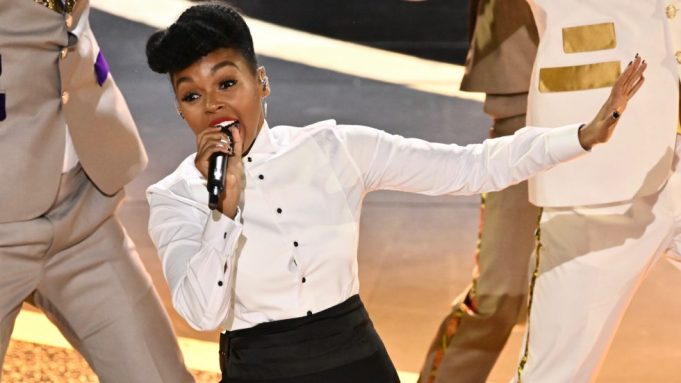 Janelle Monáe kicked off the Academy Awards with a song-and-dance production number based on her 2010 song “Come Alive,” lyrically rewritten to reference the Oscars and some of the year’s top films  — with spoken asides about the lack of female directors represented among the nominees, and what she personally represented as the show opener.

“We celebrate all the women who directed phenomenal films,” she said, midsong, “and I’m so proud to stand here as a black queer artist, telling stories. Happy Black History Month.”

Besides a slew of dancers dressed in costumes evoking films both nominated (“Joker,” “Little Women”) and not (“Us”), Monáe was also joined by Billy Porter, who sang Elton John’s “I’m Still Standing,” the climactic number from “Rocketman,” while Monáe took to the piano.

Monáe began the medley as Mister Rogers, singing the theme song from the children’s show host in a red cardigan before descending to the front row to place her hat atop Tom Hanks, nominated as supporting actor for his role as Fred Rogers in “A Beautiful Day in the Neighorhood.” Saying “Hello, neighbors,” she proceeded into an opening statement of purpose that said “tonight we celebrate the art of storytelling,” before vowing to further venerate “the misfits, the outcasts, the misunderstood.”

Apart from its nods to the unrepresented or underrepresented, the rewritten lyrics skewed more toward one of the razzle-dazzle opening extravaganzas the Oscars have traditionally been known for, with lines such as, “You’re looking at your neighbor with sweat on your palms / The camera turns to you and you try to stay calm” — made stranger only by the fact that Monáe and some of her surrounding dancers were dressed in flowery “Midsommar” garb.

Monáe took to the audience to get some help with her “la-la-las,” finding the most enthusiastic momentary duet partner in a very vocal Brie Larson.

A diversity joke followed Monáe’s appearance, as Steve Martin and Chris Rock took the stage. Quipped Rock about the opening number, “While we were backstage watching it, Steve says to me, ‘J.Lo’s killing it two weeks in a row.'”