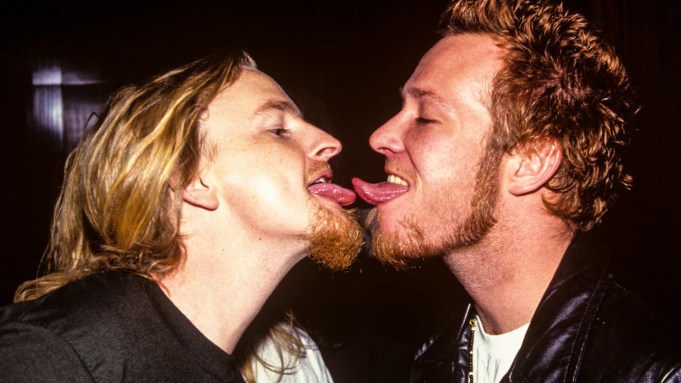 It’s actually a bit difficult to fathom now, but when legendary nightclub photographer Steve Eichner was first plying his trade in the ’90s, there was no social media, and barely an Internet with which to generate buzz around a candidly captured celebrity image.

“My actual job was to get publicity for the clubs,” Eichner recalls, “which meant photographing celebrities. So if Julia Roberts walked into the club at 3 a.m., my beeper would go off, and I’d get up and head there to photograph her.”

But the movie stars, obviously, weren’t nearly as much fun as the rock stars, something which is fully evident in his visually flamboyant new photo book “In the Limelight: The Visual Ecstasy of NYC Nightlife in the 90s,” which captures all the extravagance, decadence, and questionable behavior that were the hallmarks of legendary NYC nightclubs Palladium, Limelight, Club USA and the Tunnel during that time. Eichner actually worked for infamous nightlife impresario Peter Gatien, whose empire veritably defined nocturnal New York in the years before the turn of the millennium (and who himself released a book earlier this year, the autobiographical “The Club King: My Rise, Reign, and Fall in New York Nightlife”).

“In the Limelight” depicts the provocative sartorial opulence of the infamous club kids who stalked the various halls and dancefloors of downtown’s most notorious nightspots. But Eichner, whose stepbrother is comedian Billy Eichner, was — and is — a rocker at heart. And it was the galvanizing energy of those kids that drew in the famous and fabulous, with some of rock’s most towering figures regularly showing up to glean a bit of their magic fairy dust.

This meant photographing Steven Tyler whizzing down the slide at USA while daughters Mia and Liv looked on; and snapping Pete Townshend in the midst of a particularly sacrilegious act.

“I photographed [Townshend] against a steel wall in the Thierry Mugler room of Club USA,” Eichner recalls. “And the way the wall was welded together, it looked like a cross. He’s standing there on the crucifix showing the scars on his hands from all the guitar cuts.”

But the ’90s hitmakers were there as well, as being seen in the right places at that time was a crucial element in the cultivation of their often ignominious reputations. So he found himself photographing the likes of a young Tupac Shakur (“a great, energetic guy”), and certain members of Stone Temple Pilots lasciviously camping it.

“My encounter with Scott Weiland,” he says, “was when he was hanging out with [STP drummer] Erik Kretz in the VIP room at USA. When I came up with my camera, he grabbed Eric and they started making out; Scott was tongue-kissing him.”

Aside from their pictorial richness, Eichner’s photos in the book collectively represent a visceral snapshot of a recent but very different history. Indeed, although taken just 20-odd years ago, it was before Facebook and Instagram, when celebs were much less conscious of protecting their image — and so were decidedly more accessible, and definitely having a way better time.

“The book is like walking through one of those clubs on any given night,” he says with just a touch of nostalgia in his voice. “And this was a real moment in culture…a moment in New York City history.”

Head over to the “In the Limelight” gallery for photos of Prince, Steven Tyler, TLC, Tupac and more musicians out clubbing.