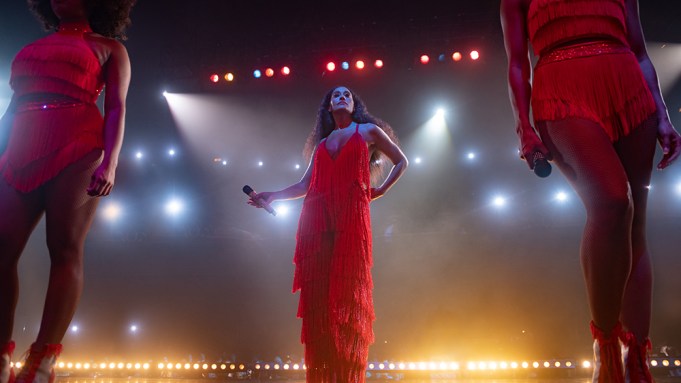 Grammy Award-winning songwriter and producer Rodney Jerkins, whose credits include songs by Michael Jackson, Jennifer Lopez, Mariah Carey and Beyoncé, is no stranger to working with nervous artists in the studio. But having actress Tracee Ellis Ross in the vocal booth presented a different kind of challenge.

“Any artist would feel intimidated when you’re Diana Ross’ daughter,” says Jerkins, executive music producer of “The High Note.” “The role of Grace Davis in the movie is this big, iconic, legendary singer, so there’s pros and cons with that. On one hand — you grew up with that so you would know exactly what that needs to look like. The other part of it, is it’s a lot of pressure. My job was to make her as comfortable as possible.“

Because of the coronavirus pandemic, the film co-starring Dakota Johnson and Ice Cube is headed to video-on-demand on May 29. Jerkins’ role was to helm Ross’ six songs from the soundtrack (as well as recordings with cast member Kelvin Harrison Jr.). He also created the music for specific scenes in the film. Having worked as the music producer on the third season of “Empire,” Jerkins understood the job description immediately.

“I was in Orlando and got a call from Mike Knobloch,” Jerkins explains, referring to Universal Pictures’ president of film music. “Me and Mike have known each other for years. We sat on the board of the Grammys together. He’s done so many great musical driven films from ‘Trolls’ to ‘Lorax.’ He said he would love for me to meet with the director Nisha Ganatra and Tracee Ellis to see if I wanted to get involved in this move. When I read the script the first song I saw was ‘Bad Girl’ by Lee Moses and I was just listening to that song, literally, two days before.”

You could say it was fate, but there was also an element of faith in Ross’ natural abilities, as Jerkins recalls “encouraging Tracee because this would be the first film of her singing. I told her, ‘Listen I’ve worked with every type of singer you can imagine, so I would love the challenge of working with you and deliver the goods. I was called the next day and was told I was hired to do the project.’”

So what was it like for Ross to step up to the microphone? the veteran hitmaker describes it as a new and terrifying experience for the actress best known for the hit TV shows “Girlfriends” and “Black-ish.”

“The first day, she didn’t exactly know what the studio was,” he says. “I was explaining step by step — ‘This is what we do here and here,’ and walked her through the creative process. She grew up around seeing other people — her mom — in the booth but it’s different being in the booth yourself. When you get in the studio, there’s no other people [like on a film set] — just me and you.”

(Watch an exclusive video of the music-making process above.)

Most of the songs in the film are performed with a backing band but the creative process for Jerkins began at the piano then moved to his home studio before bringing in musicians to record live.

Jerkins credits his experience on “Empire” for making him “great with instruction from the director,” he says. “The key is to make sure the songs match the scenes. You might be working on a big production in the studio and what actually ends up in the movie is a stripped-down version.”

The end result is a soundtrack brimming with soul-flavored pop including the uplifting theme song “Love Myself.” In the film, locations such as Capitol Studios, the Orpheum and Microsoft Theaters lend additional credibility to the music part of the story. Linda Cohen served as music supervisor on the film, bringing in such tracks as Donny Hathaway’s cover of John Lennon’s “Jealous Guy” and “Share Your Love with Me” by Aretha Franklin. (Republic Records releases the soundtrack on Friday.)

Having worked with some of the biggest names in pop and R&B, Jerkins thinks back to his experience with Michael Jackson on the “Invincible” album in 2000 and 2001 as a key moment in his own career in music. “He challenged me to dig deeper,” Jerkins reflects. “Michael [would say], ‘Go to the junkyard and hit on things and make sounds.’ There were a lot of 3 and 4 a.m. phone calls. ‘I need you to go to the studio for me.’ I’d be super tired. I would play songs over the phone and he’d say, ‘I need you to pan the hi-hats differently.’ Genius. How did he hear that over the phone?”

Jackson had a way of testing those who worked with him. Jerkins explains: “We were finishing the album and Michael wanted a song that could come out at Halloween. He had ‘Thriller,’ he had ‘Ghost’ — he always wanted spooky songs. He loved the track for the song ‘Threatened,’ only he said, ‘It’s missing Rod Serling. I need Rod Serling to rap on this.’ At first I’m thinking, ‘Is there some new rapper called Rod Serling that I don’t know about?’ I said, ‘Elaborate, Michael.’ He said, ‘You know Rod Serling from “The Twilight Zone.”‘ Five days later he says ‘Did you get Rod Serling to rap on it yet?’ I said, ‘Michael, Rod Serling is dead.’ He said, ‘Yeah but I still need him to rap on it.'”

Jerkins obtained VHS copies of every ‘Twilight Zone’ episode, deconstructed Rod Serling’s voiceovers and built, with the help of a rapper, an eight-bar rap using the vocal snippets.

Jerkins continues: “Michael comes back in the studio and again, he says, ‘Did you ever get Rod Serling to rap?’ I said ‘As a matter of fact I did.’ He looked at me as if to say, ‘You’re lying. There’s no way. I was just playing around with you!’ I pressed play and the joy that came on his face. It looked like he wanted to cry. He was so amazed that we got that done and that I took on that challenge and he loved it. It was sad it never came out [as a single] as he had big plans for that song.”

You could say the same of Jerkins’ future goals in the movie business. “I wanna go big,” he says. “Give me ‘Avatar 2’ or ‘Star Wars’ or ‘The Avengers.’ That’s what I would want.”