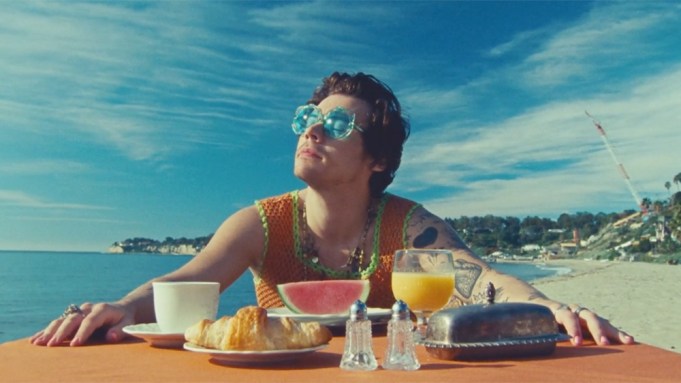 The opening frame of Harry Styles’ latest video for “Watermelon Sugar” declares: “This video is dedicated to touching,” which should give a good idea of where the clip is headed.

Filmed on a Malibu beach by Bradley & Pablo in January, Styles holds court oceanside as a bevy of barely clad beauties slink around him in the sand. Frolicking in the sweet juices of some in-season fruit, Styles sings: “Tastes like strawberries on a summer evenin’ / And it sounds just like a song / I want more berries and that summer feelin’ / It’s so wonderful and warm.”

Visually, the video, which premiered today (May 18) at 12 p.m. EST, has hints of Elton John’s classic 1983 video for “I’m Still Standing,” which was shot in the French Riviera and features the sort of body moving whiplash exhibited in “Watermelon Sugar.” The blue-tinted sunglasses also seem a natural nod to the famously bespectacled Sir Elton.

The second half of the clip is a grainy gas of a good time that finds the Harry harem dancing atop a Pacific Ocean overlook and then running into the water.

The British singer and songwriter first debuted the song on “Saturday Night Live” in November 2019. “Watermelon Sugar” is the fourth single from Styles’ second full-length album, “The Fine Line,” which has sold 1.2 million units since its release in December, according to Alpha Data.  “Adore You,” also from the album, hit No. 1 on the Top 40 and Hot AC radio formats. “Watermelon Sugar” was certified platinum by the RIAA earlier this month.

Styles is signed to Columbia Records and managed by Full Stop.