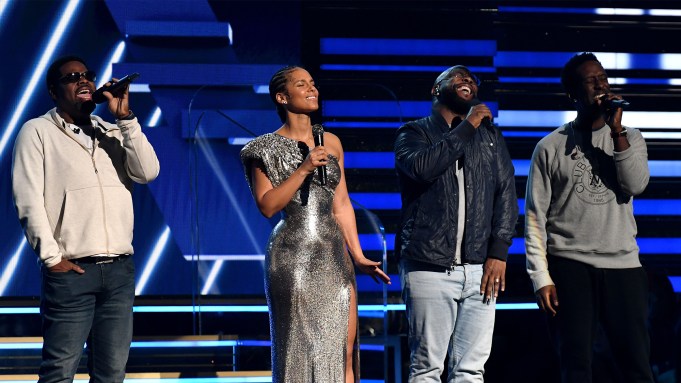 Hours after news broke of Kobe Bryant’s death, the Recording Academy paid tribute to the NBA legend on the Grammys stage.

“We never imagined in a million years we’d have to start the show like this,” she went on. “So we wanted to do something that could describe, a tiny bit, how we all feel right now.”

Boyz II Men then joined her in a surprise performance of “It’s So Hard to Say Goodbye to Yesterday” in honor of Bryant.

Just before the larger tribute, Lizzo opened the show by saying, “This one’s for Kobe” before launching into a powerhouse performance of “Cuz I Love You.”

Bryant died on Sunday afternoon after his private helicopter crashed in the Los Angeles suburb of Calabasas. Eight others were killed in the crash as well, including his 13-year-old daughter Gianna (“Gigi”). The helicopter was reportedly on its way to Gigi’s basketball game in Thousand Oaks.

It didn’t take long for the tributes to come rolling in on Sunday, with dozens of fans gathering around Los Angeles’ Staples Center, where the 2020 Grammys is taking place, to remember Bryant. The screens outside the auditorium switched to an in memoriam for Bryant while the red carpet took place, and the flags flew at half-mast.

The pre-show also included a brief moment of silence for Bryant, led by Interim Recording Academy CEO Harvey Mason Jr. “Since we are in his house, I would ask you to join me in a moment of silence,” Mason said.