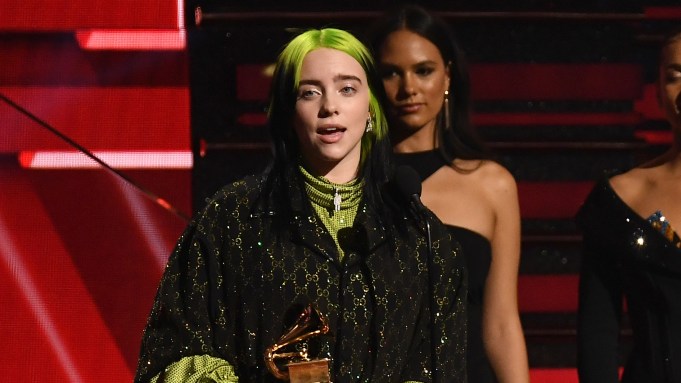 It was a big night for Billie Eilish at the 62nd Annual Grammy Awards. The Interscope/Dark Room artist took home five awards, including the top four categories of song of the year, album of the year, record of the year and best new artist, in addition to best pop solo album. Her brother Finneas O’Connell was named producer of the year and also took home best engineered album, non-classical.

“We didn’t make this album to win a Grammy,” said O’Connell. Rather, they collaborated on an album about “depression, suicidal thoughts, climate change and being a bad guy, whatever that means. … So we stand up here confused and grateful.”

Accepting for song of the year, Eilish was shocked. “Why? Who?,” Eilish exclaimed.

“I feel like I joke around a lot and I never take anything seriously, but I openly want to say that I’m grateful and honored to be here.” Accepting another award later, Eilish said: “I think the fans deserve [mentioning]… They are the only reason we are here at all.”

Referencing fans of other artists nominated, Eilish added that she knows they’re “going to talk s–t about me for years.”

Seated at her piano, host Alicia Keys made perhaps one of the biggest understatements of the night. “It’s been a hell of a week,” she said. “Real talk, we got a lot going on.”

While she didn’t reference ousted Recording Academy president Deborah Dugan or the drama surrounding her “administrative leave,” Keys made her point by encouraging all in attendance to “refuse the old system” and negative energy.

The drama didn’t dampen the spirits of the performers, especially Lizzo, who picked up her first of three awards —she was nominated for eight — after her jubilant performance of “Cuz I Love You” and “Truth Hurts,” which she dedicated to the late Kobe Bryant.

“This is really f–king sick, really cool,” said Lizzo. “This whole week, I’ve been lost in my problems, stressed out, and then in an instant all that can go away. Today all of my little problems I thought were as big as the world are all gone.”

Accepting the honors for best rap album, Tyler the Creator celebrated on stage with his biggest fan: his mother. “That’s my mom if y’all are wondering,” he said. “You did a great job raising this guy.” Tyler’s was among the most buzzy performances, a spectacle of dance and visuals. He credited Pharrell Williams for inspiration, saying “That man allowed me to be comfortable in myself.”

Asked about the moment in the press room, the artist said he couldn’t process the win right away because “my mom wouldn’t stop choking me.”

Dan + Shay, who won country duo/group performance for “Speechless,” took a moment to thank family members and their team, including managers Jason Owen of Sandbox and Scooter Braun of SB Projects.

“I want to put my heart up to this microphone,” said Dan Smyers. “You can literally hear it beating out of my chest right now.”

Gary Clark Jr. also had a big night, winning for best rock song (for “This Land”) and best rock performance.

Awards aside, tributes and shout-outs to Kobe Bryant, the Lakers legend who died in a helicopter crash earlier in the day, shared the stage. The night started with Lizzo dedicating her performance to Bryant. Later, his Lakers jersey was displayed on a chair during Lil Nas X ‘s performance of “Old Town Road” and also held high by Run D.M.C.

Alicia Keys paid tribute in her opening remarks, telling the 18,000 gathered at the Staples Center and the millions watching at home: “Earlier today, Los Angeles, America, and the whole world lost a hero. And we’re literally standing heartbroken in the house that Kobe Bryant built. … We never imagined in a million years we’d start the show like this.”