The Grammys are nothing if not a sensory experience, but what you see and hear on stage hardly tells the full picture. Variety had reporters on the ground and backstage keeping tabs on the actions. Read on for what you didn’t see on TV.

• After completing his red carpet duties, Lewis Capaldi headed to the adjoining JW Marriott Hotel for a rest before the storm. Along the way, he cheeringly posed for photos with fans.

• The red carpet was mobbed but one of the easiest stars to spot was Billie Eilish, whom Sharon Osbourne, working as on-air talent for CBS, embraced excitedly. They both squealed, naturally.

• Meanwhile, at the premiere ceremony, otherwise known as the pre-telecast, Billie Eilish was absent from the stage for her best pop vocal album grammy, but her family and team also didn’t accept on her behalf, choosing to wait and see if brother/collaborator Finneas wins best producer, which was announced next. He did and got a big kiss from his girlfriend before bounding to the stage.

• Grammys executive producer Ken Ehrlich, signing off after 40 years of curating the broadcast, quoted his own Variety article as a preamble to the show’s start. “When they weren’t calling me a–hole, they called me the Energizer Bunny,” he said. “I’ll take the energizer bunny.”

• The live show began promptly at 5 p.m. when Lizzo hit the stage to sing “Cuz I Love You,” but Ariana Grande was forgivably fashionably late, arriving at 5:02 and running to her seat while navigating her dress and clapping for lizzo.

• Press room shenanigans rarely rate above the occasional political statement, but this year’s Grammys featured winner Elvis Costello singing to the gathered journalists and Matt Schulz from Cage the Elephant reading a poem called “Love Is Patient, Love Is Kind.” In addition, more than one Grammy winner used the trophy as a comedic prop.

• Elvis Costello also revealed a future project: an in-the-works remix of his classic catalog by Sebastian Krys due out later this year. Said Costello: “The nature of that remix is going to be so surprising when you hear it, because it involves taking my voice off the record and replacing it entirely with Spanish language singers from across 12 Latin countries and Spain. … Because music doesn’t stand still. It needs to be reinterpreted. This is not a tribute record, this is a remix. It is the original backing tracks with nothing added instrumentally, interpreted by young and established and upcoming singers.”

• Because one F-bomb is never enough, Lizzo dropped two during her acceptance speech for best pop solo acceptance. “This is really f—ing sick,” she said, followed by an encouragement to make “music that feels f–ing good and invigorates people.”

• A moment caught on Instagram told the story of the night in one image as Lizzo and Billie Eilish embraced backstage then proceeded to goof off as managers Brandon Creed and Kevin Beisler cheered on.

• Gloria Gaynor celebrated her first Grammy win since taking home a trophy for “I Will Survive” four decades earlier. “It’s wonderful for me … after 40 years of waiting and wondering if it would happen again,” she said of her  best roots gospel album win for “Testimony.” “I feel like it’s God’s timing.”

• With Kobe Bryant’s image displayed on screens throughout the L.A. Live complex, the late basketball star was very much on the minds of all. This was especially so inside Staples Center, where photos of Bryant line the walls on every floor. One person who took the time to survey an image of Bryant in action was Island Records founder Chris Blackwell.

• “I’m a father, so it means a lot,” said DJ Khaled backstage reflecting on his win for best rap/sung performance with Nipsey Hussle and John Legend. He was later asked about Diddy’s comments at the Clive Davis pre-Grammy party the previous night — the mogul said that hip-hop and black music have “never been respected by the Grammys.” Said Khaled: “We have a lot of room to do better … and greater and learn and grow. That’s what Puff was saying. Let’s put more love out there. For everybody. We just want ours, too. That’s it. So this is for hip-hop. This is for Nipsey Hussle.” 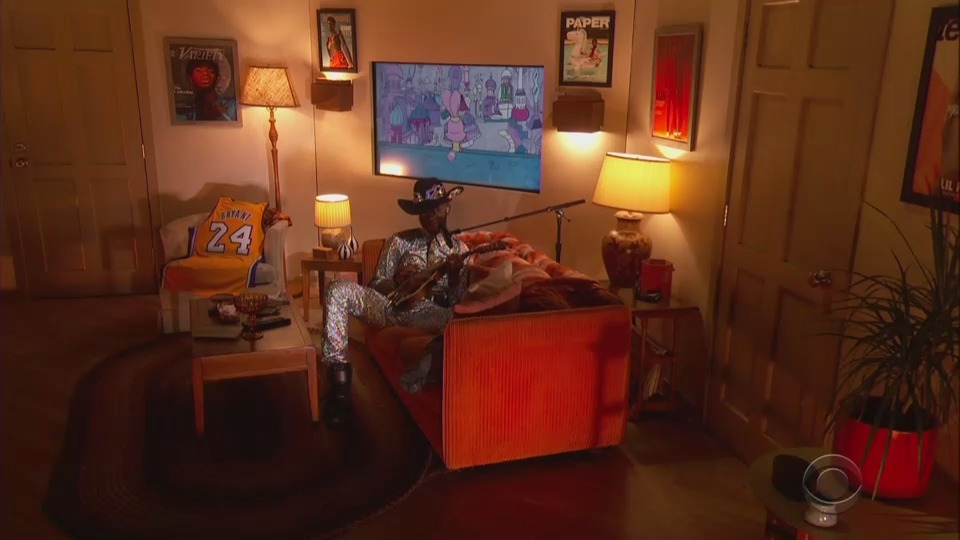 • The Staples Center audience gave a much deserved standing ovation to Demi Lovato for her moving performance of “Anyone.” Billie Eilish also got the crowd on its feet, as did Usher’s Prince medley on which he was joined by Sheila E. The percussionist said of the set list, which included Little Red Corvette and Kiss: “I asked Usher what he wanted to sing [because]if someone is going to do a tribute, it has to be personal. I wanted to go with what song meant something to him lyrically.”