The dumpster fire of controversy surrounding the Grammy Awards in the days since the Recording Academy abruptly ousted new president/CEO Deborah Dugan largely was kept offstage at the annual Clive Davis Pre-Grammy Gala on Saturday night — at least until Diddy went in during a 50-minute-long speech, but you can read about that here.

The rest of the evening was a characteristically star-studded, music-filled version of the industry’s greatest party, with an eye-popping list of celebrities in attendance and performances from Beck, Brandi Carlile, John Legend, Ryan Tedder and Miguel with Santana, Chance the Rapper, Cyndi Lauper, Khalid, Cynthia Erivo and a group of Bad Boy Records artists paying tribute to Diddy.

(Photo by Gregg DeGuire/Getty Images for The Recording Academy)

Highlights from the performances included a cold-open from Beck and his band that was familiar to anyone who’s seen his concerts in recent years: He opened with his 1993 breakthrough “Loser” and then moved into his hit from three years later, “Where It’s At,” which includes a middle section that incorporated his harmonica playing on his early song “One Foot in the Grave.” Later, Santana and Tedder teamed up for 2000’s Clive Davis-helmed hit “Smooth”; John Legend played “A Change Is Gonna Come” and a new original; Cynthia Erivo played a show-closing tribute to Janet Jackson; and the Bad Boy collective — including Faith Evans, Lil Kim, Mase, Carl Thomas and Diddy’s son King — paid tribute to the mogul with a medley of hits including “Mo Money, Mo Problems” and “I’ll Be Missing You.”

But the evening’s most unexpected musical highlight came when Carlile paid tribute to Joni Mitchell, who was debilitated by a brain aneurism in 2015 but has been a regular at the Clive party since she recovered, with a stunning version of Mitchell’s 1971 classic “A Case of You.”

Carlile was then joined onstage by Lauper for a rousing romp through “Girls Just Want to Have Fun.”

While Diddy’s accusation that the Grammys have never respected black music made headlines, his painfully long 50-minute acceptance speech for the awkwardly worded Grammy Salute to Industry Icons Award was mostly about his own history and career. He warned the audience that he was going to be talking for a while, then said his story began in 1972 and the speech seemed to unfold in real time from that date, with talk of growing up in Harlem and receiving a small record player and a James Brown 45 one Christmas instead of the bicycle he’d hope for — an event that he dates as the beginning of his career as a record man. Other highlights included his early career as a backup dancer in music videos — “I made it to the finals of a Madonna audition — I didn’t make it because I didn’t know how to vogue” — and an early meeting with music executive Lyor Cohen where he witnessed Cohen and Run-DMC, whom Cohen then managed, “cursing each other out at the highest level of cursing out,” which led the young Diddy to think,  “I don’t know if I want no white man yelling at me every day.” 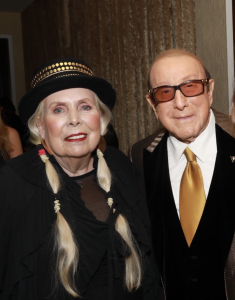 Cohen, along with Beats by Dre cofounder and longtime music executive Jimmy Iovine, Atlantic Records co-chair Julie Greenwald and his first mentor Andre Harrell were among those saluting Combs in a tribute video.

However, Combs’ long speech, which began as the always-long event was hitting the three-hour mark, effectively robbed Janet Jackson and Erivo of their moment. However, the performance was stellar and Jackson’s remarks, especially when she noted how moved she was by Erivo, were classy and gracious.

And with that, as the hour hit 1 a.m., the crowd moved off into the night.