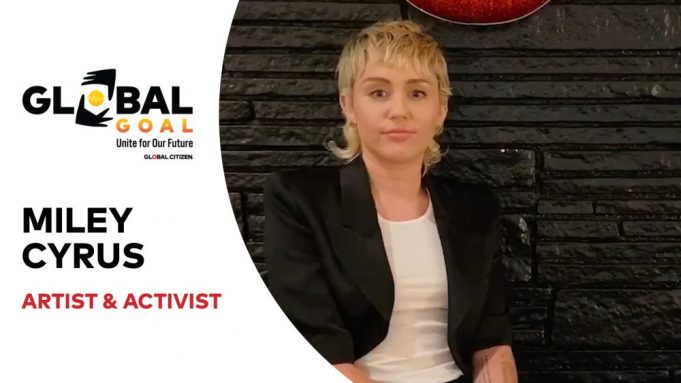 Global Citizen has announced its first initiative since the “One World: Together at Home” special, a program that is enlisting celebrities like Lady Gaga, Miley Cyrus, J Balvin and Justin Bieber to lobby governments and corporations for funding of coronavirus relief funding and programs.

Named “Global Goal: Unite for Our Future,” the campaign will also have music, film and TV stars recording PSAs to “help rally the public to call on their world leaders to commit the funding needed to ensure equal access to the tools needed to fight COVID-19.”

Global Citizen said some of the celebs’ efforts will go toward using their social media to engage fans and some toward contacting governments and corporate leaders themselves to solicit pledges, “similar to what Lady Gaga did for ‘One World: Together At Home’.”

“At a time where we’ve seen injustices in our society increase even more, we now have the opportunity to take a stand for equality and health for all,” Cyrus said in one of the first PSAs to be released as part of the campaign (click on image above). “Because this pandemic has affected our entire world, we need to ensure that everyone, everywhere, has the solutions for this pandemic: testing, treatments, and a vaccine. Together people around the globe across ages, borders, and identities, are calling on governments, businesses, and philanthropists to step up their funding for these critical solutions.”

The end goal for the campaign is an international pledging summit to take place June 27. It’s being described as a joint effort between Global Citizen, the European Commission, Bloomberg Philanthropies, the Bill & Melinda Gates Foundation and the Wellcome Trust.

Leaders from many of the major nations of the world are said to already be on board with the campaign, including representatives from the UK, Mexico, France, South Africa, Italy, Spain, Canada, Germany, Norway, Austria, Belgium, the United Arab Emirates, South Arabia, Morocco and New Zealand. (Missing from that list, not surprisingly given the known politics of the moment, is the United States.) They’ve joined what Global Citizen describes as “a rallying call for an investment of billions toward the development and equitable distribution of COVID-19 tests, treatments, and vaccines globally.”

Said Hugh Evans, co-founder/CEO of Global Citizen, “Around the world, people everywhere are desperate to resume a greater semblance of normalcy, spend time with friends and loved ones, venture safely outside their homes, and to earn a decent wage. To make this a reality, we need to make COVID-19 tests, treatments, and vaccines available to everyone, everywhere. The critical work done by scientists globally, the efforts to distribute solutions regardless of cost, income, or geography, and the need to rebuild economies in the poorest countries, all require a massive increase in funding. … No one is safe until everyone is safe.”