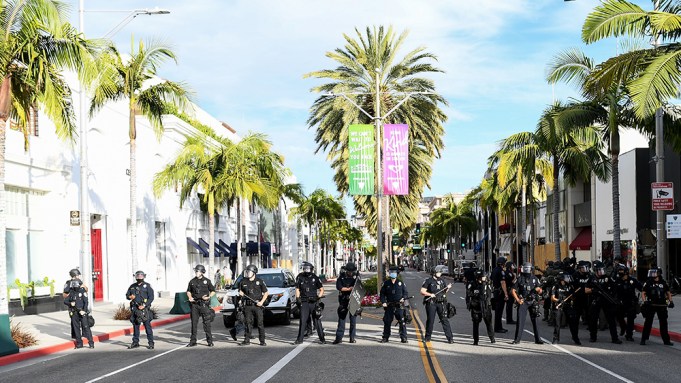 There’s been no shortage of musicians sounding off on social media, calling for an end to police violence and racism in the wake of George Floyd’s death at the hands of a Minneapolis law-enforcement officer, but as protests broke out in at least 17 cities across the United States, artists including Lil Yachty, J. Cole, Halsey, Nick Cannon and more took to the streets with protesters.

Yachty posted video of himself saying to fellow protesters, “I feel like we gotta stand for something or we’ll fall for anything, you know what I’m saying?” — but in his caption noted that “I am no different from the next man. Every voice matters and must be heard.”

I am no different from the next man. Every voice matters and must be heard.

Nick Cannon made the most of the photo op, posting a photo of himself in a crowd wearing a black hoodie bearing Floyd’s last words, “Please I Can’t Breathe.” “THEY GON HEAR US LOUD AND CLEAR!!!” he wrote. On Sunday morning, he posted a long message and spoken-word video that incorporated the protests, slavery and the coronavirus pandemic.

I Can’t Breathe… Again! Gaht Damn!! I can’t breathe! Our voices have been quarantined Covid 19-60s to 1619. Jamestown choked me, sold me, shackles hold me tightly, by my neck and I can’t breathe… Again. 2020 ain’t no fucking vision , on your Tell-Lie-Vision, of why I’m living as a prejudged Villain! CNN , FOX news commentating and debating, while I can’t fucking breathe… Again!!! How many times I gotta say this! I’m Taking the gloves off Beacuse Racism is the main deadliness that’s contagious! I just got diagnosed and received a degree in criminology but fuck your education. I don’t want to learn shit from a nation that’s racist. Definition of Policing. Overseeing property, I can’t understand how the white man never understood how to handle the Hue man properly. The honorable Elijah Muhammad and the Noble Drew Ali spoke Constantly, consciously and cautiously about this ungodly prophecy and you still worried about your profits see! Amazon Deliveries, Hand outs! Hands up don’t shoot, but now you’re knees on my neck stopping me, from occupying oxygen that God obviously brought for me, for I am his offspring, his true seed, muthafucka get off of me!!! Please!! I cant breathe!!! Please somebody call the police on the police!! Cuz I can’t breathe ….Again! And Everything Hurts! Your words! Your knees! Your nerve! Your white wife who had the nerve, to say she was frightened by black life, while my face is on the fucking curb! I ain’t scared of no fucking virus, this mask is for a riot. I can’t breathe, and the media telling me to keep quiet. Suffocating me into silence!! The devils greatest trick, convincing the world that we were the ones who were violent. Naw they the ones deficient, insufficient comprehension of their barbaric existence. Y’all worried about this pandemic when our grandparents still trying to recover from when you gave them Syphilis! Because in our blood, We scared of the white cells. Attacking our immunity. The system. Defective. Infected. So Who has the disease you or me? Because I’m at a dis ease, dis advantage, dismantled, disability, of your white ..#ICANTBREATHE #AGAIN #GEORGEFLOYD #JUSTICEFORFLOYD #NCREDIBLE #THEICANTBREATHEACT ✊🏿

Halsey said she had been hit by rubber bullets fired by police during a protest in Los Angeles on Saturday, via a series of photos on her Instagram story.

North Carolina rapper J. Cole had not posted on social media at the time of this article’s publication, but local news outlets spotted him demonstrating.

Tinashe posted photos and video of herself and others marching in Beverly Hills and on a Los Angeles freeway, noting that “The protest I participated in yesterday in DTLA was non violent. We were there to protest police brutality and black lives, period.”

In her story, she angered at least one commentor by writing in her Instagram story, “If you’re posting about looting, (especially if you’re white), you’re worried about the WRONG THINGS.”

Rapper Chika posted that she was detained for “failure to disperse,” later adding that the Los Angeles protest was peaceful until law enforcement allegedly “began beating” protesters.

So I was dEtAiNeD for “failure to disperse”….. hmmm. What the fuck does this look like?