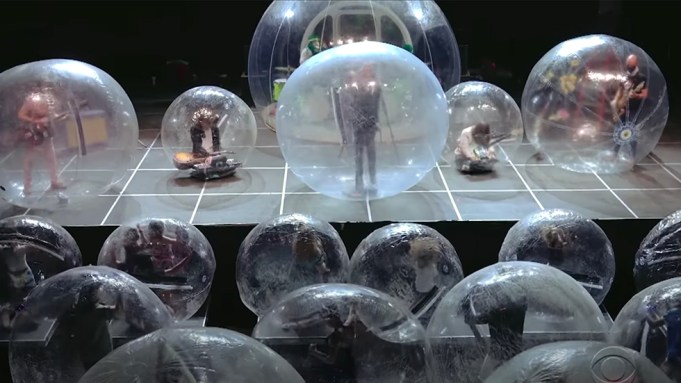 By now, most Americans watching late-night TV have gotten used to seeing bands performing in their houses, studios, or even their bathrooms. Needless to say, it hasn’t been the most exciting experience for viewers, but “The Late Show With Stephen Colbert” struck socially-distanced gold this week when the Flaming Lips came on to play their song “Race For The Prize.” From what looks like a warehouse or large open space, each band member was encased in his own individual plastic bubble. As a bonus, audience members were bubbled, too. (Watch the performance above.)

While this visual gimmick is not new for the famed Oklahoma-based alternative rock act (they have performed in plastic bubbles in years past — even at Coachella where frontman Wayne Coyne rolled atop the audience — and are now being hailed for their prescience), in the middle of a pandemic that has challenged music fans around the world, the dystopian feel of the bubbles elicits all kinds of emotions from viewers, from surprise, to sadness to some even wondering if this is a real way fans might in enjoy a concert together while the world waits for a vaccine.

“Race for the Prize” was released as the first single from the Flaming Lips’ 1999 album “The Soft Bulletin,” and remains a fan favorite. The oddly appropriate-for-the-times lyrics to the song also may play into the Lips’ decision to perform the song on “The Late Show.” To wit: “Two scientists are racing / For the good of all mankind / Both of them side-by-side / So determined / Locked in heated battle / For the cure that is their prize/But it’s so dangerous / But they’re determined.”

“Race For The Prize” also appears on the band’s latest release “The Soft Bulletin: Live at Red Rocks featuring The Colorado Symphony Orchestra.”