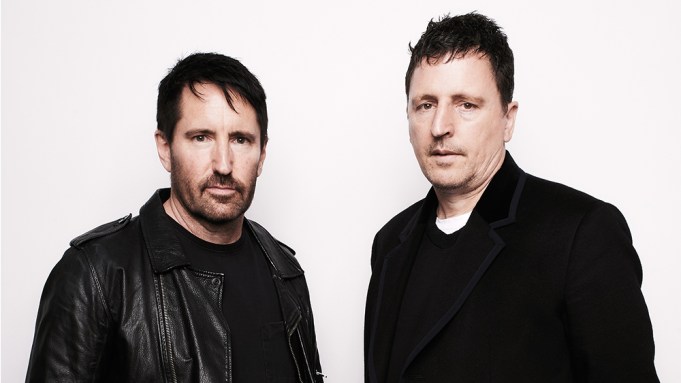 Labrinth joined Reznor and Ross in being nominated in both song and score categories. The latter Nine Inch Nails members (and Oscar winners for “The Social Network”) are up for scoring “Watchmen” as well as contributing an original 1940s-themed song (“The Way It Used to Be”) to the HBO limited series. Labrinth’s two noms are for HBO’s “Euphoria,” which earned him both a series dramatic score nomination and a song nod (“All for Us”).

Nathan Barr has the most nominations in the music categories, with three. He’s up against himself in the main title theme category, with nods for both the “Carnival Row” and “Hollywood” themes. HIs third nomination comes in the series dramatic score division, again for “Hollywood.”

Rickey Minor also faces himself in the same category, being nominated in the outstanding music director category for his work on both the Oscars and “The Kennedy Center Honors.”

Also doubly nominated is Laura Karpman, who has twin nods for documentary score and main title theme, both recognizing her work on Discovery Channel’s “Why We Hate.”

Joining Labrinth and Reznor/Ross in the original song category are Pharrell Williams and Chad Hugo for a song from “The Black Godfather” (“Letter to My Godfather”), Ingrid Michaelson for a tune from “Little Fires Everywhere” (“Build It Up”), the “Marvelous Mrs. Maisel” team of Thomas Mizer and Curtis Moore (“One Less Angel”) and “This Is Us” series composer Siddhartha Khosla and songwriting collaborator Taylor Goldsmith (“Memorized”). Rounding out the category, in this category’s history of deliberately rude inclusions, is “Eat S—, Bob,” from “Last Night Tonight with John Oliver,” credited to the writing team of David Dabbon, Joanna Rothkopf, Jill Twiss and Seena Vali.

Labrinth is joined in the series dramatic score competition by Martin Phipps for “The Crown,” Göransson for “The Mandalorian,” Britell for “Succession” and the team of Danny Bensi and Saunder Jurriaans for “Ozark.”

In the limited series score category, Reznor and Ross face competition from Nathan Barr for “Hollywood,” Kris Bowers for “Mrs. America,” Antonio Gambale for “Unorthodox” and the team of Isham and Isabella Summers for “Little Fires Everywhere.”

“Watchmen” and “Euphoria” both got three nominations apiece in the music categories, with nods for outstanding music supervision on top of the song and score bids (to Liza Richardson for the former show and Adam Leber for the latter). “The Marvelous Mrs. Maisel” also picked up a second music nomination in the music supervision category (going to Robin Urdang, Amy Sherman-Palladino and Daniel Palladino). Other music supervision nods went to “Better Call Saul Thomas Golubić), “Insecure” (Kier Lehman), “Killing Eve” (Catherine Grieves and David Holmes) and “Stranger Things” (Nora Felder).

Music-related programming also showed up in the broader categories.

The Grammy Awards telecast was once again shut out of the variety special category. But the show did pick up four nods, for direction, production design, lighting design/direction and sound mixing.

The American Music Awards got one nomination, for technical direction/camerawork. “Dolly Parton’s Heartstrings: These Old Bones” got a nomination for outstanding television movie.

As evidence for the belief that music-related shows often have a tougher time with the Academy, there is the category of outstanding variety special (pre-recorded), in which not a single music-based show made it in, and all six nominations are for comedy specials.

Below, a full list of nominees for the seven music categories:

Succession • This Is Not For Tears • HBO • HBO Entertainment in association with Project Zeus, Hyperobject Industries and Gary Sanchez Productions
Nicholas Britell, Music by

Euphoria • And Salt The Earth Behind You / Song Title: All For Us • HBO • HBO Entertainment in association with Reasonable Bunch, A24, Little Lamb, Dreamcrew, ADD Content Agency | HOT | TCDY Productions
Labrinth, Music & Lyrics