Dr. Dre Talks George Floyd’s Death With Lil Wayne: ‘That Cop Had His Knee on All of Our Necks’ (Watch Video) 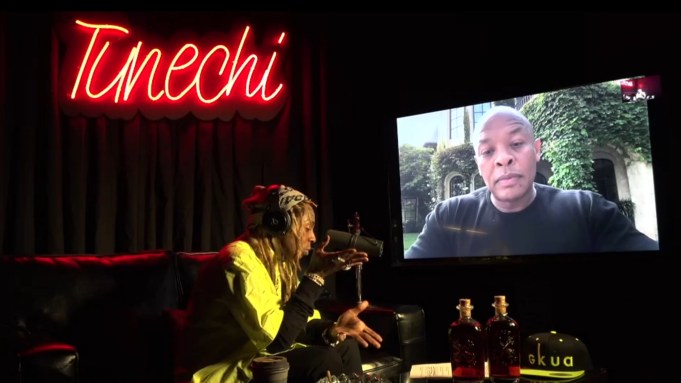 Lil Wayne had a special guest on his Young Money Radio show Friday night: Dr. Dre, the legendary producer, entrepreneur and former member of N.W.A, who, as his discography and the biopic “Straight Outta Compton” show, knows more than a little about police violence.

Dre pulled no punches in discussing the ongoing wave of police violence against the American black community, which is the object of protests in at least 17 major cities in the U.S. in recent days.

He continued: “They’re supposed to be arrested and convicted of first-degree murder. Point blank, period. And the f—ed up part is they’re so brazen with it. Broad daylight, with cameras on. And he’s got his knee on this guy’s neck for that amount of time and he doesn’t give a f—. His hand is in his pocket, he may as well have been whistling.

“It’s baffling but it really feels like something is going to happen now to at least put us in the area where we can start talking about a way to make this thing stop,” he concluded. “I think this one could be the one, because I’m seeing white people out there protesting as well, which is a good thing.”

Watch segments from the interview below: