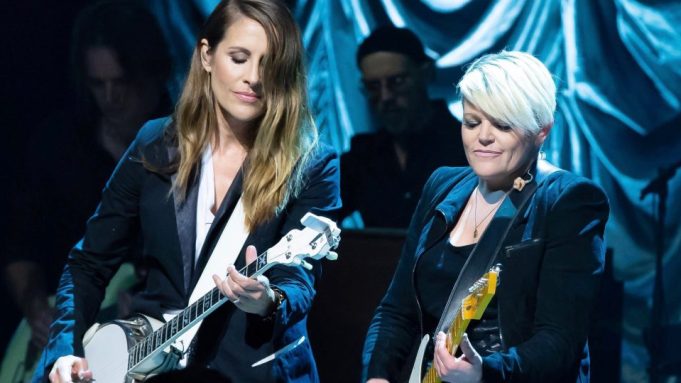 Along with releasing their first new single and video in 13 years, “Gaslighter,” the Dixie Chicks did a short interview with Apple Music’s Zane Lowe to discuss the long layoff from recording since their Grammy-winning “Taking the Long Way” album came out in 2006.

“Our nine kids collectively are we we paused for so long,” explained Martie Maguire — “and finding out that teenagers are a lot harder than babies.”

“Babies take you off the road, teenagers put you back,” added Natalie Maines, as the trio laughed.

Unlike “Taking the Long Way,” the new album, also called “Gaslighter,” will not involve a rotating team of co-writer-producers.

“The first song we wrote with Jack Antonoff,” said Emily Strayer. “At the time we thought we thought we were gonna write with a bunch of different people and get different producers, and we wrote it with him.” And then after working with Antonoff on the newly released title track, “we were like, he needs to produce it and this needs to be the sound for this album. He blew us away.”

The group also announced a release date for the “Gaslighter” album as they unveiled the lead single, May 1, and opened up pre-orders for the release.

As for coming back after so many side or solo projects (Maguire’s and Strayer’s group the Court Yard Hounds released two albums, and Maines issued one), “I think the tour in 2016 really solidified our want to do this,” Robison said.

“We’re definitely out of practice… It’s just as painful as it was to do all the artwork, and we check our own typesetting and we do all of that and it’s a little bit nerve wracking, and now I’m remembering 15 years ago, the last time we did it.”

The interview with Lowe did not go into the subject matter of the new song. From the title, some had expected it might be political in nature, but instead, it seems to be more personal, reflecting Maines’ earlier statement that much of the album was written coming out of her split from actor Adrian Pasdar, which was finalized in December after 17 years of marriage. “When I was getting a divorce, I had a lot to say,” she told the Spiritualgasm podcast.

Among the lyrics: “We moved to California and followed your dreams / I believed the promises you made to me / Swore that night ’till death do us part / But you lie-lie-lie-lie-lied / Hollywood welcomed you with open doors / No matter what they gave you, you still wanted more / Acting all above it when our friends divorced / What a lie-lie-lie-lie-lie.” The chorus hook: “Gaslighter, denier / Doin’ anything to get your ass farther.”

Children will definitely figure into the album in at least one song, though. Said Strayer, “We actually have a song called ‘Juliana Calm Down,’ and that’s my daughter’s name, and she was a little mortified at the beginning… Now every time she gets all worked up, her brothers are like, ‘Juliana, calm down… She’s a little mortified about that, but it’s a good start to the song.”

The group’s 14-year-old previous album won the triple crown at the Grammys, for album, record and song of the year.