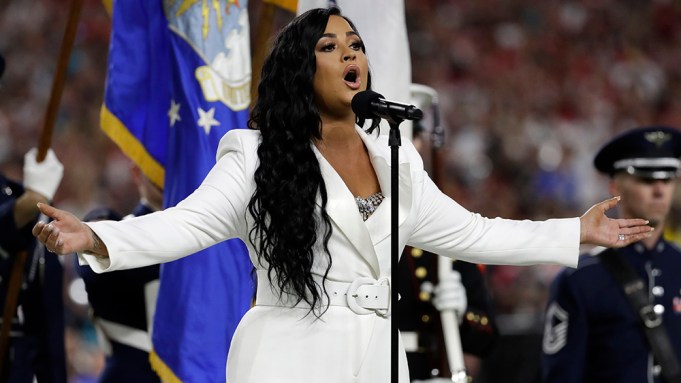 Fresh off her Grammys performance last weekend, Demi Lovato kicked off television’s biggest night by singing the national anthem during Super Bowl LIV at the Hard Rock Stadium in Miami.

Her rendition earned extensive applause from the crowd at the stadium, as well as praise on social media. Alongside Lovato, sound artist and performer Christine Sun Kim signed the National Anthem in American Sign Language, on behalf of the National Association of the Deaf.

The pre-game ceremonies began with gospel singer Yolanda Adams and the Children’s Voice Chorus performing “America the Beautiful” before the San Francisco 49ers and the Kansas City Chiefs took to the field.

Also during the pre-game show, Maroon 5’s Adam Levine gave a tearful tribute to Kobe Bryant. The stage turned purple before the band performed “Memories.” Levine, while holding a Lakers No. 24 shirt, said, “Needless to say, I think we know who this song is dedicated to.”

Pitbull, Dan and Shay, and DJ Khaled also made appearances during the pregame show. Jennifer Lopez and Shakira will host the Super Bowl halftime show.

Lovato’s Super Bowl LIV appearance comes just one week after debuting a new song at the 62nd Grammy Awards in Los Angeles. Lovato’s track “Anyone,” which was written just before her drug overdose in the summer of 2018, garnered a standing ovation from the audience that evening.

Lovato joins an esteemed group of singers who have performed the national anthem at the Super Bowl, including Beyoncé, Lady Gaga and Idina Menzel.